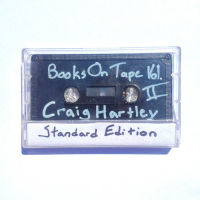 Pianist Craig Hartley's debut—Books On Tape, Vol. 1 (Self Produced, 2013)—focused on autobiographically-based originals, with only a single cover in the mix. Now, for the sequel, Hartley flips the script.

Books On Tape, Vol. II-Standard Edition is all about the covers, with only one Hartley-penned number on the program. Everybody from Duke Ellington to Paul McCartney and Johann Sebastian Bach to Miles Davis gets their due here. But don't let the focus fool you. This is anything but a standard standards date. Hartley has a good time reconstructing many well-known tunes and creating clever mash-ups that turn unlikely bedfellows into good company. He personalizes each take, feeding the music with his own experience(s) and eclectic tastes. In the end, that's what makes this "Standard Edition" speak with originality. As the classic song says: "tain't what you do; it's the way that you do it."

The manner in which Hartley and his bandmates—bassist Carlo De Rosa and drummer Jeremy "Bean" Clemons—interpret "Caravan" is an early indicator that this group isn't one for rote run-throughs. A lengthy introduction that grooves with a mixture of straight-up funk and NOLA niceties serves as a prelude for an adrenaline-fueled ride that's bolstered by a wicked left-hand ostinato. The band hits hard, Hartley injects a dash or two of swinging levity into the mix, De Rosa solos in the eye of the storm, and Clemons rumbles and runs over a vamp. It's hardly your run-of-the-mill "Caravan," but it's near-perfect in the way that it develops and changes shape. It's a divergent take on a classic that also manages speaks to the model(s).

Hartley has his way with seven other compositions in the five performances that immediately follow that energized album opener. An odd-metered take on Fats Waller's "Jitterbug Waltz" gaily coasts along, toying with other metric suggestions along the way; "Sinclair" fuses Bach's "Prelude No. 2 in C minor" and Davis' "Solar," brilliantly bridging the chasm that separates the Baroque parlor and the jazz jam session; McCartney's "Junk" is a journey powered by lyrical and plaintive ideals; "Mood Indigo" is painted with a bright and bouncy sheen, hinting at stride piano and referencing the playful "shave and a haircut, two bits" riff time and again; and "Imagine Peace Piece" brings a sense of beauty and calm to bear in a marriage between John Lennon's "Imagine" and Bill Evans's "Peace Piece." Then the album reaches its conclusion with the lone original—"Just Wait." It's a number that balances exotic flavors and uncertainty with a sense of stability connected to the tonal center.

Hartley consistently shines, both as pianist and arranger, throughout this run of songs. But he's never a glory hog. Hartley is a true team player, as are his bandmates, and this trio works with a cooperative mindset, making for great interaction and cohesion in the music. Big ears and good reflexes abound. Clemons gently circles around an idea when the music calls for it, pushes the band into hyper-drive when needed, and comfortably works between those two extremes. And De Rosa is simply dynamite, whether drawing focus or holding up foundations. He threatens to steal the spotlight on more than one occasion with his dynamic and melodically engaging solos. There are no weak links in these musical chains. Unique arrangements, solid individual showings, and strong group chemistry add up to one great album.