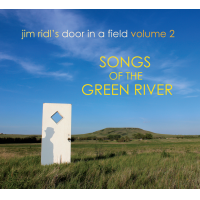 This is pianist Jim Ridl's seventh album as a leader, and all revolve around specific motifs involving people, places, things, images, and words. For example, his debut CD, Five Minutes to Madness and Joy (Synergy Music, 1999), is based on a poem by Walt Whitman which Ridl then elaborated upon in a variety of musical expressions. On the one hand, Ridl is a solid, mainstream jazz pianist who has worked with a panoply of cohorts like Dave Liebman, Joe Locke, and many, many others. As such, he can adapt to almost any style and situation. On the other hand, when he does his own thing, he uses country music, classical complexities, and gospel-influenced blues to great effect.

In his first volume of Door in a Field (Dreambox Media, 2003), Ridl reflected on his upbringing and family life on a farm-ranch in the western part of North Dakota. He used a piano quartet format spruced up with violin, viola, cello, and accordion. The current album, volume 2, continues his reflections on his experience in North Dakota. It retains bassist Darryl Hall and drummer Mark Walker as the core rhythm section. There all similarity ends.

The new album is more of a tribal gathering than a studio session of a jazz group! Here is a musician, a man in the fullness of his maturity, who brings together many of the personal and musical forces of his life to say what it all means to him now in the perspective of the rural world he came from. First, he conveys his experience in words: he offers a diary of poems that appear in the liner notes and in the songs. Then, he gathers together the congregation: some of his most treasured musical friends and family members. They include some of the top instrumentalists and vocalists on the scene today: saxophonist Steve Wilson, violinist Zach Brock, vibraphonist Joe Locke, vocalists JD Walter, Gabriela Anders, Gina Roche, Paul Jost, and Erin Kemp; and guitarists Wayne Krantz and Scott Anderson.

But hold the phone! Along comes the family: his wife Kathy Ridl on accordion, and the special treat of the Kemp Family Singers, thirteen of Kathy's family members, all of whom are seasoned choral singers and teachers who have proved their mettle by occupying high places in the world-renowned Westminster Choir! Such an ensemble of cohorts and family could fill an opera stage but in reality gathered in smaller groups during multiple recording sessions and overdubbing.

This reviewer has followed Ridl closely for over a decade, and he can attest that everyone in the album played a major role in his life and work over many years. They are not just "old friends, bookends." They all have been major influences on Ridl's life and music. It's not often that a musician gets to do this. As Barack Obama's daughter Malia said to him when he was elected the first African American President, "You better be good!"

The album is indeed quite good, and you could even argue that it is a candidate not only for a Grammy but for a Pulitzer Prize. That is, it is a musical and literary testament and memoir incorporating multiple elements of the American musical idiom and poetic expression. This recording takes hold of you and changes you. The liner notes and the lyrics that appear in several of the songs are worthy expressions in themselves. For example, here are some lines by Ridl that appear in the text of the CD cover:

Farm, I will live the rest of my days in gratitude
For what I carry in my heart you freely gave me;
A body that is strong, a mind that is agile,
A spirit that flies, a voice that sings.

Meadowlark, you are near.
Shadow me and keep me
in thy humble wing.

This is poetry from the American heartland.

All the music has a basis in Ridl's memory and alternates between lightness, controlled energy, and meaning-laden reflections. The latter are the heart of the recording, with tracks seven, "Belief I Sing / Peace Be Your Song" and track ten, "Remembrance / In Wheat Fields / Banks Church Anthem," forming the epicenter and climax. They convey a message that is scriptural in tone but with a fresh modern sensibility and simplicity. Other songs are like waking up in the morning to whatever is next in country life, whether a dance event, doing the chores on the farm, driving around in an old pickup truck, or being in the meadows alone or with a lover. The music is jazz-influenced, but it is really an expression of American song in the broad-brush sense that you find in blues, country, and folk, as well as in Aaron Copland, Ned Rorem, Samuel Barber, and other composers who transformed American music of the twentieth century. In a sense it is where jazz came from rather than what it became.

Here is a rundown on the tracks:

The album begins with "For Thee a Western Sky," a gentle melody conveying images of the high plains. It first appears via Zack Brock's violin and is then elaborated by Steve Wilson's soprano saxophone leading to some relaxed improvisation by Ridl on piano. "Prairie Round" is an understated hoe-down dance which has some interesting contrapuntal interplay between vocalists JD Walter and Gabriela Anders. Bass, flute, violin, and accordion then join in.

"Green Meadow Waltz" is a variation on the same tune from volume one with lyrics now added by Ridl. It is sweetly sung by Gabriela Anders. Ridl offers the following thoughts about the song: "I envision my mother and father, embraced, dancing to their favorite Czech song, in the meadow near the Green River... slowly dancing adrift in meadows of green, they're filled with desire... Zach is playing my Grandfather Laudie's violin on this track." This is followed with a high energy, "Red '47 Pickup," a rockin' country tune reminiscent of John Denver's "Country Road." Zack Brock lights up the track and deserves special praise for his work throughout this album.

The title tune, "Door in a Field (v2)" begins with a violin solo similar to the beginning of Vaughn Williams' "A Lark Ascending." JD Walter wrote the exceptional lyrics and his singing does justice to a song that truly belongs in the American vocal repertoire. There is also some beautiful vibes playing by Joe Locke. The feeling is of being happily alone with ones thoughts in a wide space, an experience that is sadly becoming increasingly impossible in overcrowded urban life with a populace tethered to smartphones and computers.

The Glenn Campbell hit "Dreams of the Everyday Housewife" is just a great tune with a ramblin' country feeling. The rendition is notable for some skillful stickwork by drummer Mark Walker, who sets a strong rhythmic pulse.

As mentioned earlier, "Belief I Sing / Peace Be Your Song" is the spiritual epicenter of the album. It consists of a church gospel blues melody and chords. The lyrics are from a Walt Whitman poem with a coda by Ridl. Four vocalists, headed up by Paul Jost and Gina Roche, intone the sermon-like words that speak to the possibilities inherent in a future that is lived into with a simple faith in things to come.

"You Know How It Is, Too" lightens up the mood once more with a country blues tune. Its funky accent is highlighted by Wayne Krantz' guitar. We get a chance to hear Ridl's creative piano improvising, with some lively saxophone and guitar solos as well. The rhythm section rocks, with bassist Darryl Hall adding some solid blues inflections.

"Long Summer Road" is an impressionist tone poem. It captures the sounds and feeling of driving on an isolated road on the plains. Ridl starts out with some synthesizer long tones like an old car engine, followed up by saxophone and piano with a violin screech heard softly in the background. Saxophonist Wilson breaks out into a hot riff, and then we hear more "car sounds," a hot violin solo by Brock, and a slowing down to a quiet ending.

The capstone of the album is "Remembrance / In Wheat Fields / Banks Church Anthem" Beginning with the sound of soft chimes and bird calls reminiscent of some of Oliver Messaien's compositions, there then appears a slow, ballad-like piano introduction. As in track one, Wilson's saxophone states a simple melody. Then, we are surprised and graced to hear the a capella singing of the incomparable voices of the Kemp Family Singers praising the labors of the fields! Then, saxophone and piano play a slow march as a prelude to the Kemp Family's singing of a church anthem. Anyone who is not uplifted, at least in a quiet way, by this testament to life must be a jaded cynic.

Jim Ridl and all those who contributed to this one-of-a-kind album, have given us a gift. Ridl and his wife Kathy both lost their elderly mothers soon after recording the album, and Jim lost his brother to a heart attack. Their memories are embedded in this album (Kathy's mother sang in the recording with the Kemp singers at the age of 97.) The words and music ever remind us of the importance of our loved ones and the preciousness of those life experiences when we are at our most authentic and attuned.

For Thee a Western Sky; Prairie Round; Green Meadow Waltz (v2); Red ‘47 Pickup; Door in a Field (v2); Dreams of the Everyday Housewife; Belief I Sing / Peace Be Your Song; You Know How It Is, Too; Long Summer Road; Remembrance / In Wheat Fields / Banks Church Anthem.