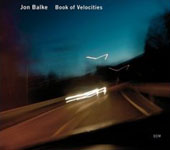 On paper, Norwegian pianist Jon Balke's first solo album reads like challenging stuff: a collection of eighteen short improvisations, grouped into five sub-sections (four "chapters" and an "epilogue"), and concerned as much with the velocities with which the piano's strings can be struck—and how they can be struck—as with thematic or harmonic development. Something for fellow pianists to marvel at and the general listener to struggle with.

In actuality, Book Of Velocities is an accessible and rewarding album, rich in melody, which requires no formal musical training or special cerebral powers to appreciate. And despite its structure, it is wholly non-episodic—the eighteen miniatures progress organically and coherently, both within their separate sub-sections and over the course of the disc as a whole, to create a close-up micro-galaxy of new and familiar colors and textures.

Then there are the pedals, two of them, to be applied singly or together, slowly and gently or with rapidity and force.

Practically the only thing Balke doesn't do is use the wooden panels of the piano as drums. Neither does the instrument appear to have been specially prepared. And there isn't a whiff of post-production electronics.

A seriously transporting—as in magical—experience, Book of Velocities was recorded in September, 2006 by producer Manfred Eicher and tonmeister Markus Heiland at Radio Studio DRS in Zurich, Switzerland. It's the sort of immaculately realised niche recording which makes ECM such a valuable part of the jazz ecology.