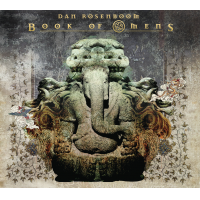 Book of Omens, Rosenboom's eleventh release as a leader or co-leader, follows Fallen Angeles (Nine Winds, 2011), his stunning acoustic septet recording. Returning to the bold, amplified palette featured on many of his prior efforts, the mixed quintet's electro-acoustic instrumentation perfectly evokes the futuristic dread implied by the album's conceptual theme of cosmic destruction and renewal.

Joined on the frontline by multi-instrumentalist Golia, the intrepid pair matches the visceral shredding intensity of guitarist Jake Vossler and the thunderous rhythmic variations proffered by electric bassist Tim Lefebvre and drummer Matt Mayhall. Although the opening fanfare, "Prologue: The 12 Signs," unfolds with regal authority, the distinctive speed metal riffing that fuels the compounded time signatures of the following tune, "Playing With Fire," leaves little doubt as to its inspiration; to those raised on metal, Slayer's throttling attack is an obvious touchstone for Vossler's assaultive fretwork.

No stranger to sonically confrontational environments, Golia acquits himself spectacularly in this dynamic setting, whether unleashing stratospheric tenor salvos or, during more introspective passages, haunting alto flute ruminations. Keeping pace with Golia, Rosenboom's spirited cadences reveal a lyrical virtuoso with a commanding tone, whose expansive trumpet technique is saliently paralleled in his diverse writing. Despite the primal fervor of scorching numbers like "The Swarm" and the volatile "Supernova," a number of these vanguard compositions, including the impressionistic tone poem "Moth" and the hallucinatory Western noir of "The Pale One," exude a timeworn melancholy, further reinforcing the date's apocalyptic ambience.

More than most of his peers, Rosenboom has a composer's ear for the subtleties of genre; his tasteful incorporation of extroverted styles like fusion, metal and prog into an avant-garde jazz setting is far more organic than many similar efforts. Book of Omens, a dark, foreboding record whose myriad layers reward repeated spins, confirms Daniel Rosenboom as an artist on the rise.