Darius Jones Quartet: Book of Mae'bul (Another Kind of Sunrise) 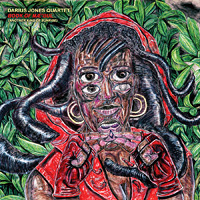 Book of Mæ'bul (Another Kind of Sunrise) is the third release from Darius Jones to document his impressive musical growth as a bandleader. Beyond his salient contributions to groups such as Little Women, Mike Pride's From Bacteria to Boys and Tanakh, Jones' 2009 AUM Fidelity debut, Man'ish Boy (A Raw & Beautiful Thing), established the young alto saxophonist as a force with which to be reckoned—a singular talent capable of holding his own in the company of acknowledged masters like multi-instrumentalist Cooper-Moore and iconic drummer Bob Moses. Two years later, Big Gurl (Smell My Dream) followed, which presented Jones in a more conventional setting accompanied by his peers, bassist Adam Lane and drummer Jason Nazary. Book of Mæ'bul expands upon the terrain covered in his sophomore trio date, with pianist Matt Mitchell, bassist Trevor Dunn and drummer Ches Smith filling out the ranks.

Mitchell proves to be an especially apt foil for Jones, whose singular flair for extrapolating unusually ardent resolutions from conventionally memorable themes is bolstered by the pianist's keen ear for improvising decorative flourishes that enrich the melodic character of Jones' captivating writing. Buttressing this traditional pairing with their mercurial interplay, Dunn and Smith reveal a deep-seated rapport, one honed in Downtown ensembles generally far more esoteric in their instrumentation and approach than proffered by this quartet, including Dunn's own Trio Convulsant, Mary Halvorson's trio and quintet, and Secret Chiefs 3. Together they bring a bold edginess to the proceedings, their wily detours and impetuous asides emphasizing the ecstatic depth of Jones' lyricism, especially on "My Baby," where Dunn and Smith's capricious tempo vacillations spur the leader's dynamic chiaroscuro reading of the quixotic tune into vanguard territory.

Other than a few spirited numbers like the lilting swinger "The Fagley Blues" and the jaunty bop of "Winkie," a significant portion of the record is devoted to languorous mid-tempo ballad fare, which provides Jones and company ample opportunity to stretch out and explore the plangent possibilities of straightforward melodic contours. A romantic at heart, even Jones' most strident statements are imbued with a bluesy levity, from the coruscating screeds that punctuate the dramatic opener "The Enjoli Moon," to the warbling vibrato he employs on "Be Patient With Me." Ever vigilant of the structures he has conceived, Jones stays rooted to terra firma, even during his most impassioned excursions. His band mates comply in turn, tastefully complementing gospelized alto cadences that soar to the heavens with elegant statements of their own. A strong addition to Jones' growing discography, Book of Mæ'bul (Another Kind of Sunrise) offers another view of his expansive artistry.

The Enjoli Moon; The Fagley Blues; Winkie; Be Patient With Me; My Baby; You Have Me Seeing Red; So Sad; Roosevelt.