Talibam!: Boogie in the Breeze Blocks 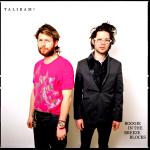 At first, Talibam!'s Boogie in the Breeze Blocks appears to be regurgitated Doors Wide Open-meets-Frank Zappa-meets-Ornette Coleman-meets razor-sharp punk. But then, why waste time trying to do what many would, which is put anything new in a category?

This is wildly new music, fresh in its approach to the collision of melody, harmony and rhythm that makes for quite a soup for the songs to swim in. The clear influence of Jim Morrison gives the lyrics edgy and intoxicating raucousness. From Zappa comes the wild humor; from Ornette comes the wellspring of harmolodic invention; and from punk, a heck of a lot more.

But make no mistake, keyboard artist Mathew Mottel and percussionist Kevin Shea are iconic artists in their own right and they bring their own perspective to the twisted state of play in society today.

The "anti-art" art of a movement such as Dada and the explicit language of surrealism are the mainstays of the record. This inventive coloring to the musical suite here makes for an enthralling experience. The extraordinarily funny beginning—featuring what appears to be imagined "official communication" between a lawman and his dispatcher—sets the tone for this quirky musical expedition in a Gotham-like city. Amid hectic electronics that simulate not just city sounds but genuine harmolodic music and ferocious drum splatters, the story of Talibam!, radio-terror artists, emerges.

And the music unfolds almost like a brilliantly illustrated audio comic book.

Along the way there are spectacular diversions or subplots. "Jim O'Rourke," is a wonderful doffing of the hat to the experimentalist musician and filmmaker—a characteristic racy, breathlessly narrative. "Schroeder meets Jagger" is another hilariously racy programmatic adventure that so completely captures the insanity of the myths of Charles M. Schulz and The Rolling Stones that it is easily one of the most memorable hard-driving rock music inventions on the record. And the record endgame from "Roosevelt Island: I Can't Do It" through to "Herodiade" is high energy and devastatingly good.

Much should also be made of the larger ensemble that backs Mottel and Shea on several tracks. Peter Evans' trumpet, Jon Irabagon's various saxophones and Sam Kulik's trombone make a bold and intrusive impression. Danielle Kuhlmann's vocal artistry is also worthy of mention. The gutty guitars of Chris Forsyth and Anders Nilsson are superb throughout.

But it is clearly the controlled insanity of Matthew Mottel and Kevin Shea that makes this record not just a hilarious experience, but one worth taking seriously once getting past the obvious irony of the band's name.