The Mystery Of The Bulgarian Voices: BooCheeMish 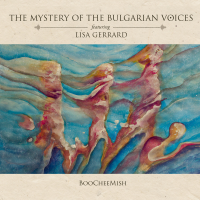 Extraordinarily, given the global success of the Bulgarian State Television Female Vocal Choir's idiosyncratic and uplifting Le Mystère Des Voix Bulgares (4AD, 1986), this is the BSTFVC's first release of newly recorded material in over two decades. It is another triumph, recapturing the magic, and much of the quirky harmolodic signature, of the ensemble's acapella debut while adding understated layers of instrumental accompaniment. The choir, whose name has been anglicised for the album, is conducted by its original director, Dora Hristova, and longtime singers are included in the line-up. So is BSTFVC's erstwhile labelmate, Lisa Gerrard, who sings on four tracks. Gerrard fits in well but her presence presumably has more to do with marketing than artistic concerns.

The story of how a state-sponsored choir in Soviet-era Bulgaria transcended politics, borders and cultures to become a massive, international, commercial success is almost as remarkable as the music. It bears repeating...

In 1951, Filip Kutev, a Bulgarian symphonic composer, was appointed founding director of Bulgaria's State Ensemble for Folk Songs and Dances, tasked by the government (since the late 1940s a Soviet puppet regime) with eliminating "anti-socialist" currents in the country's traditional folk culture and turning it into a "progressive" force. Kutev fulfilled his modernising brief imaginatively, by blending the signature elements of traditional Bulgarian vocal music—dissonances, quarter tones, drones and asymmetrical rhythms—with arrangements derived in part from the impressionism of Claude Debussy and the twelve-tone innovations of Arnold Schoenberg. The result was unlike anything heard anywhere before, a roots-based music shot through with avant-garde flourishes.

Kutev's first choral group, the Filip Kutev Ensemble, morphed into the BSTFVC. The man who introduced the ensemble to Western European listeners was Marcel Cellier, founder of Switzerland's pioneering folk-music label Disques Cellier, aided and abetted by his wife, Catherine. Despite the Cold War and the Soviet bloc's obsession with Western spies, the couple somehow managed to get permission to visit Bulgaria regularly in the late 1950s, carrying a Telefunken reel-to-reel and making recordings of traditional music in the capital, Sofia, and the countryside. Back in Switzerland, Marcel featured the recordings on his weekly radio show, From the Black Sea to the Baltic, which ran from 1960 until 1985.

The first vinyl compilation of the Celliers' tapes—a mixture of recordings made by the Celliers and others sourced from the archives of Radio Sofia—was released by Disques Cellier as Le Mystère Des Voix Bulgares in 1975. The disc was a succès d'estime, but sales were not spectacular. That changed in 1986, when Cellier licensed the disc to 4AD, who in turn licensed the US rights to Elektra/Nonesuch.

The rest, as they say, is history. Happily, that history is still being made.

About The Mystery Of The Bulgarian Voices