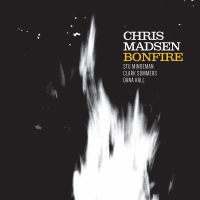 The winds of change have been blowing over the record business for over two decades, altering the ways in which consumers listen to music. With the rise of internet-based services such as Spotify and YouTube, the prospect of an expensive trip to the recording studio has soured for many jazz musicians. Despite the fact that the days when their predecessors put out a new album each year have long gone the way of the dodo bird, there is still something to be said for physical media, if nothing else as a form of immortality. New generations will discover their work, long after the artist and those who remember them are gone.

Although Chicago-based saxophonist Chris Madsen finds himself caught in those winds, he has carved a solid niche for himself as an educator and performer who occasionally releases new music. In addition, he leads a jazz-funk fusion ensemble with the moniker Kings Of The Lobby, who debuted their first album in 2017. Bonfire finds Madsen leading a new quartet, and presents him as a man whose creative output has only just begun to peak. Not until its third song is reached, does it become clear that the best approach to his work is to expect the unexpected. Better yet, to suspend expectations altogether, because the quartet defies convention while working within its constraints. It's a refreshing tune which seems at first glance to be straightforward jazz, yet seeks to prove that the composition can take the forefront without overshadowing the artist.

The album is comprised of eight songs written by Madsen, and anyone under the impression that aggressive soloing or genre-bending statements are requisite ingredients for creating fresh music need only listen to the saxophonist's work here to learn just how effective subtlety can be. This isn't to state that those mechanisms don't have their place, but rather that emphasizing the complexities presented by the relatively improvisational structure of jazz in a cerebral, yet accessible way can rival raw showmanship in terms of artistic value.

The pen may not be mightier than the sword, but from a musical perspective, it certainly surpasses it in outright versatility.

To play devil's advocate, these traits are not without an unintended drawback. Though Madsen's writing on songs such as "Authority" and "Hundred Center" are technically and intellectually marvelous, there is little untethered emotion to be found on the album; emotion which is often brought forth by those aforementioned aggressive solos to engage the audience. That said, none of this precludes anyone from simply enjoying Bonfire as the work of a very talented jazz quartet, and those not applying an analytical ear to the album are unlikely to be too distracted by the precision with which it is arranged.

The quartet is filled out by some of the most in-demand musicians in Chicago's jazz scene, with Stu Mindeman on piano, Clark Sommers on bass and Dana Hall taking up the drums. Chris Madsen's tightly woven compositions are remarkable, and spark a curiosity as to the depth of his bag of tricks. Though its most transfixing moments are stacked atop the track list, Bonfire is a compelling album which took several years to appear. Armed with a new band and what would seem a perfectionist's approach to his art, Madsen hopefully won't keep those in the windy city (and beyond) waiting quite as long for its successor.