BY FRIEDRICH KUNZMANN
November 2, 2019
Sign in to view read count 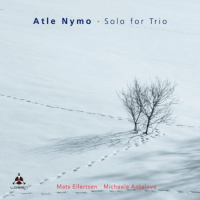 While the reduction of instrumentation is a typical occurrence in the world of music—most commonly practiced for piano—the opposite is rarer. Norwegian woodwind virtuoso Atle Nymo seems to have this concept in mind on Solo for Trio—his debut album as a leader. Supported by ECM-associated Mats Eilertsen on bass and talented Slovakian drummer/percussionist Michaela Antalová, Nymo creates an atmosphere that is based around the careful unveiling of tonality. Note by note and sound by sound, textures and structures seem to arise autonomously. The secret lies in a minimum of pre-planning.

The trio played just one concert together before going into the studio for the one-off session which bore the fruit gathered on this release. The result is the logical conclusion of three curious minds in search of space and calm in music. To what extend the spontaneity presented breathes authenticism is aptly proven by the inclusion of the two live cuts "Balance" and "Solo for Trio," which line up smoothly with the remaining seven exercises. From sparse bass-clarinet cries coupled with minimal snare brushes and bowed bass passages ("Chapter 1," "Chapter 2"), to more exuberant expositions of swirling saxophone blows and rolling bass stabs ("Round Shape," "Klikk"), the trio remains an entity throughout, whose unity is defined not by perfect harmony, but by the dissonant search for the same. Flaringly nervous bass movements accompany flickering percussions by Antalová with drive, and together invite the warm tone of the woodwind to round off the edges.

Like a photograph, Solo for Trio captures a specific moment in time of which the beauty isn't a forced concept but comes about naturally. The picture in question however was taken in a time when developing film was a process and involved some cost. So, while the object isn't elaborately planned, the moment of pulling the trigger sure is.