BY IAN PATTERSON
January 10, 2015
Sign in to view read count 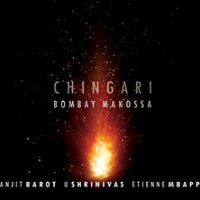 Released just days before the death of pioneering mandolin maestro U. Srinivas, Bombay Makossa assumes an added poignancy as one of his last recorded ventures in a career that began as a child prodigy in the late 1970s. Though nearly all the tracks were penned by Ranjit Barot Chingari was intended as a trio of equals. Accordingly, there's a fine compositional balance in the arrangements and tight trio interplay throughout. Chingari means spark in Hindi and collective sparks certainly fly on occasion. That said, it's Srinivas in the main who steals the thunder with some electrifying playing.

As on his solo album Bada Boom (Abstract Logix, 2010), Barot's musical palette is multi-colored. Southern Indian classical, jazz, funk and Afro flavors blend seamlessly, with Etienne Mbappe' soulful vocals on most tracks alternating with Barot's konnakol. As the rhythm section of John McLaughlin's 4th Dimension since 2010, Barot and Mbappe know each other's vocabulary inside out; from the konnakol/bass exchanges of the opener "Pack Up Your Bags" and throughout the entire album bass and drums dovetail with the brio of long-standing confidants. Alternating between knotty unison lines—with Srinivas often on board—and free-flowing passages, their elastic rhythms conduct a tight-but-loose rein.

This waltz between composed and improvised play is seen to great effect on "Sona Inon," one of several tracks sung by Mbappe in the Duala language of Cameroon. Mbappe's smokey vocals bookend a thrilling, loose-limbed jam where Srinivas' liquid improvisation is underpinned by bass lines that purr and rip and Barot's polyrhythmic bustle. Similarly, on the melodic Afro-pop of "Fireflight" the trio moves between tight harness and freer play that showcases Barot's broad vocabulary.

On the dreamy "Longue Lami," where African and Indian worlds collide in a beautiful slow-motion explosion, Srinivas' nuanced phrases echo bewitchingly. The mandolinist cuts loose on the atmospheric "Tempest," unleashing a sweet storm of the sort typical of Remember Shakti concerts. Bass funk and zingy mandolin lines drive "Third World"; Srinivas and Mbappe in turn slip their respective tethers, though lyricism is an inherent part of their improvisations. There's a touch of Bollywood—a universe the prolific composer Barot knows well—about "Bombay Makossa." The cheery melody and Mbappe's distinctive vocal line provide the song's frame for this grooving number though it's Srinivas' lightning run over Barot's punchy percussive motif that really grabs the ear.

It's terribly sad to think that Chingari will never tour or record again because there's an evident chemistry hard at play in this trio. It's also difficult to imagine how Remember Shakti can replace the genius that was U. Srinivas. There may be more of Srinivas' music in the vaults but if that isn't the case then Bombay Makossa serves as a fitting final testament to an extraordinary musician.