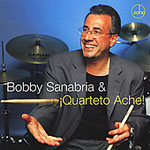 One of the most obvious things about watching Dizzy Gillespie, in particular when pursuing his Afro-Cuban muse, was how much fun he was having. All too often musicians become so entrenched in the seriousness of their work that they forget music is also meant to be passionate and pleasurable, as much fun to hear as it is to play. Drummer Bobby Sanabria hasn’t forgotten this important aspect of the art, and with his current group, ¡Quarteto Ache!, he follows in Gillespie’s footsteps in more ways than one. The group’s self-titled recording is an example of how an infectious sense of playfulness can imbue the music with a vibrancy, a sense of excitement that not only captivates, but draws the listener in, making him/her an active participant.

Bookending the recording with two Gillespie pieces, “Shaw ‘Nuff” and “Be-Bop,” Sanabria makes it clear that he is one of the primary torch-carriers for the Afro-Cuban approach. But what Sanabria is especially astute at is integrating rhythms and styles from various aspects of Latin America into a cohesive whole. “Funky Mr. D,” for example, combines elements of Cuban bolero, Brazilian samba cans?o and more a more traditional blues form into something that speaks its own language. “Soleshia” couples a 3/4 jazz waltz with a 6/8 Afro-Cuban bemb? feel. “Aum” demonstrates that there is a clear link between the Middle East and Latin forms. “El Trane,” a more straight-ahead bebop tune, pays homage to both Elvin Jones and, of course, John Coltrane in a modal workout that, by virtue of its polyrhythmic density, ties in perfectly with the rest of the programme.

The group is not comprised of clearly distinct stylistic voices, yet everyone plays with confidence, energy and commitment. Sanabria aside, whose drumming style is exuberant and empathic, the other standout is Jay Collins, who, along with contributions on tenor and soprano sax and a variety of flutes, does a “Rahsaan Roland Kirk” on the intro to “El Trane,” blowing both saxophones at once.

But most of all it is clear that Sanabria and the group are just plain having fun. Quotes pop up liberally, drawing inspiration from sources as disparate as The Wizard of Oz and, not surprisingly, A Love Supreme. As intense as the group gets, and at times it can be very intense, there is a clear sense that these players are enjoying themselves; one can almost see the smile on Sanabria’s face as bassist Collins quotes from “If I Only Had a Brain.”

There is a certain party atmosphere to the record, which is not to say that this isn’t serious music. Sanabria and ¡Quarteto Ache! are unquestionably players who are devoted to their craft. But although the music is as weighty as any, there is a sense of enjoyment that is easily felt and most welcome.