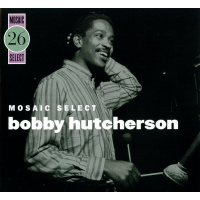 Among the relatively small community of vibraphonists, Bobby Hutcherson is not only one of the most influential, he's clearly the most widely versed and consistent too. In a career now nearing its sixth decade, Hutcherson has played mainstream to Third Stream and soul jazz to free jazz. A mainstay of the Blue Note label in the 1960s and 1970s, he released ten discs as a leader between 1965 and 1969, and also played on albums by artists including Eric Dolphy, Andrew Hill, Jackie McLean, Joe Henderson, Tony Williams and Grachan Moncur III.

While the 1970s was a decade when most artists dabbled, to a lesser or greater extent, with the integration of electric instruments and rock rhythms, Hutcherson remained relatively unswayed. So while the five 1974 through 1977 sessions that make up Mosaic Select 26 find the vibraphonist incorporating electric piano, and giving an occasional nod to a more pop-centric approach, for the most part Hutcherson continued to do what he did best: put together strong working ensembles capable of handling a diversity of material that nevertheless remain stylistically in the center of the mainstream. The majority of this material has never been reissued domestically in the US in any format, and much of it is seeing release on CD here for the first time, outside a few tracks that have appeared on compilations.

The five tracks from the April 1974 session that resulted in Cirrus are notable for Hutcherson's proclivity for the marimba. He still used vibraphone for the heads of tunes like trumpeter Woody Shaw's complex yet enduring "Rosewood, and his own tunes—the balladic "Even Later, Latin-informed "Wrong Or Right, modal African-centricity of "Zuri Dance and more insistently swinging title track. But with the exception of the title track, he solos strictly on marimba and it's a defining texture of the date.

Shaw had been around since the early 1960s, working extensively with Eric Dolphy and guesting on albums by McCoy Tyner, Chick Corea and Larry Young. But it wasn't until the 1970s that his star began to rise significantly, especially in the year of this Hutcherson session, when he'd record his classic The Moontrane (Muse, 1975), which led to a contract with Columbia and a number fine albums including Stepping Stones: Live At The Village Vanguard (Columbia, 1978). Energetic and consistently innovative, Shaw was the perfect foil for Hutcherson. Mainstream it may have been, but Hutcherson always stretched (if not broke) the envelope, making accessible music that, nevertheless, remains challenging and fresh-sounding to this day.

Saxophonist Manny Boyd is another consistent thread that runs through these sessions, appearing on all but one of the five dates. Why he never garnered more acclaim is a mystery, as he's a strong soloist and empathic ensemble player. The April 1974 session finds him teamed with Shaw and saxophonist Harold Land—another Hutcherson regular who collaborated with the vibraphonist on the popular San Francisco (Blue Note, 1970)—to create an appealing yet paradoxically loose but completely synchronized front line.

Trumpeter Oscar Brashear replaces Shaw for the March 1975 session that resulted in the five tracks of Inner Glow, originally released only in Japan. It's the only date to use a trombonist (Thurman Green), and Land is back for another strong post-bop session that, again, finds Hutcherson focusing on the marimba as his solo instrument of choice. All but one tune belongs to Hutcherson, ranging from the brooding funk of "Boodaa to the gentle swing of "Cowboy Bob, the modal insistence of "Searchin' The Trane and the ambling "Roses Poses. Pianist George Cables wouldn't show up on a Hutcherson session until the following year, but his Phrygian-based "Inner Glow is an indicator of at least some things to come.

Hutcherson often split compositional duties with members of his group (most notably on 1965's Components, where one side featured Hutcherson compositions and the other the writing of drummer Joe Chambers). On the February 1976 session that yielded seven tunes, six of which would form Waiting, bassist James Leary III contributes five tunes (with Hutcherson revisiting "Roses Poses and "Searchin' The Trane from the previous session), and the complexion is considerably different to what came before.

While it's still centered in the mainstream, the session comes closest to acknowledging the influential rock rhythms that had found their way into the vernacular of so many jazz artists of the time. Drummer Eddie Marshall—who worked with pianist Mike Nock in mid-1960s seminal fusion group The Fourth Way—brings a different kind of energy to the group than Larry Hancock, who appeared on the 1974 and 1975 dates. "Roses Poses, while retaining its Latin vibe (largely due to Kenneth Nash's percussion work), is brighter and feels more contemporary, as does this second look at "Searchin' The Trane.

Leary's "Don't Be Afraid (To Fall In Love Again) is a buoyant piece of soul jazz with a light but persuasive backbeat from Marshall. "Hangin' Out With You, the shortest tune of the session, has a theme that feels geared for radio play yet, once the solo section kicks in, finds Hutcherson soloing with relentless energy over an equally forceful rhythm section.

The core of this group—Hutcherson, Boyd, Leary and Marshall—would remain a working unit for four years, and appear on the rest of the sessions in this set. The initially strong chemistry just gets better from session to session.

An August 1976 date leans heavily to the balladic. The View From The Inside begins with Hutcherson revisiting "Even Later from Cirrus, this time titled "Later, Even. A trio piece with Leary and Marshall, its elegant simplicity is in sharp contrast to the darker blues feel of "Houston St., Thursday Afternoon, which features a spare but compelling soprano solo from Boyd.

Boyd's "Song For Annie is suitably melancholy, with his full-bodied tenor accompanied empathically by Larry Nash on electric piano. It evolves into a mid-tempo swing, kept light and ethereal by Marshall's subtle cymbal work. "For Heaven's Sake is the only standard of the set but is perfectly in keeping with the subdued nature of this session.

The final recording date, March 1977, finds George Cables replacing Nash on piano, and the quintet stretched to a septet with the addition of trumpeter Freddie Hubbard and saxophonist/flautist Hadley Caliman. Hubbard was enjoying considerable success at this time on a series of Columbia albums that came after CTI successes like 1970's Red Clay and Straight Life. His virtuosic solo intro to Marshall's "Sundance Knows says all that needs to be said about his prodigious talent, and it's more the pity that he's no longer capable of this kind of power and energy.

While the title track to the session (Knucklebean) is a hard-hitting swinger from Marshall that features a visceral solo from Caliman (the knucklebean of the title), this brief album (just over thirty-two minutes) covers a range of feels, from Cables' gently soulful "Why Not to the more powerful "Sundance Knows and Hutcherson's bossa-informed "'Til Then. The septet also revisits Hutcherson's "Little B's Poem —first heard on 1964's Components—a straight-ahead post-bop piece that's become one of the vibraphonist's most often-recorded pieces.

While Hutcherson's star—like many artists who purposely avoided the allure of success through the fusion route—seemed to dim in the 1970s, these five sessions on Mosaic Select 26 prove that he was still hard at work and making compelling music. His tenure with the SF Jazz Collective, in recent years, has helped raise his visibility again, and For Sentimental Reasons (Kind Of Blue)—his first release as a leader in eight years, due out in June, 2007—will, no doubt, find him with a solid following. In the meantime, Mosaic Select 26 fills in a gap in Hutcherson's discography that's well worth visiting.

Boodaa; Waiting; Prime Thought; Roses Poses; Don't Be Afraid (To Fall In Love); Searchin' The Trane; Hanging Out (With You); Convergence (Coming In Again); Later, Even; Houston St., Thursday Afternoon.

Shame, Shame; Love Can Be Many Things; Song For Annie; Laugh, Laugh Again; For Heaven's Sake; Why Not; Sundance Knows; So Far, So Good; Little B's Poem; 'Til Then; Knucklebean.