35 Days in May: Bo Bo Bazinsky In the Bronx 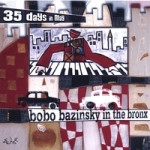 One of the most attractive things about jazz in the 21st Century is its polyglot nature. No longer is it the music of the classic trumpet-tenor saxophone quintet playing transmogrified blues and show tunes. Today, influences as disparate at Eastern Indian drones and Karl Stockhausen electronica, are tossed into the beaker on the stir plate with the rate at 1000 rpm. It's rare to find anyone who takes greater glee in shattering the jazz status quo than pianist Jeff Kaye, on a one man crusade to redefine how jazz is performed and heard.

Bo Bo Bazinsky In the Bronx is an all-out assault on delicate jazz sensibilities and should be approached with caution by listeners who never made it to Miles Davis' Tribute to Jack Johnson (Columbia, 1971) in their jazz listening education. "Out of the Blue opens like a hip hop groove gone wrong on Ecstasy, and this is just how multi-instrumentalist Jeff Kay wants it. A deuterium funky tonk covered with layered rhythms and instruments makes for very dense production.

The title cut approximates a club dance tune that recalls the hypnosis of UB40's brilliant debut Signing Off (Virgin, 1980), only louder. Add the Mile Davis effect of the total jam and "Bo Bo Bazinsky In the Bronx approximates a free-for-all. Kay turns next to the standard "There is No Greater Love, giving it what might be best described as a post-modern deconstruction with an incendiary device. In doing so, Kay is able to reveal corners of the song not previously heard or considered.

"Country Wizard is electronica at its best, sounding like the soundtrack of "Miles Chases the Voodoo Down in search of a Silent Way —if that coupling were a movie. Paul Carr's tenor saxophone lends the only retro-credentials to this very forward-sounding piece. Kiser's trumpet is muted and so potently recalls the late Miles that it will run listeners back to Agharta (Columbia, 1975). The soul-jazz anthem, "The In Crowd, is given an electronic face lift with a shot of Eskatrol and a mushroom tea shooter. Kay's electric piano and throbbing synthesizer make the song perfect for a Rave party. "Big Smoke" is reminiscent of music by bassist Jonas Hellborg and guitarist Shawn Lane, sharply cutting edge and still enjoyable.

It is hard to anticipate hearing a recording as original as Bo Bo Bazinsky In the Bronx for the rest of this year. Jeff Kaye is a mad genius, sorcerer, and musical alchemist. This is not jazz for the faint of heart.

Out of Blue; 20 Blind 20; Bobo Bazinsky in the Bronx; There Is No Greater Love; Country Wizard; The In Crowd; The Big Smoke; Ain't Necessarily So.