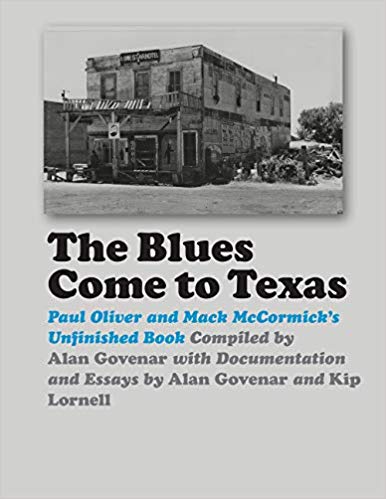 While the presently published reviews of Blues Come to Texas are accurate in their breadth they are not so in their depth. The quixotic tale of blues historians Paul Oliver and Mack McCormick is a story all its own, but it is also a subtopic of a much larger consideration of the blues. This is made more curious by the fact that Oliver and McCormick and a score of other writers, record collectors, and general roustabouts, all bent on documenting the blues, are as much a part of the story as the music itself. Two narratives dominate the discussion of the discovery and marketing of folk music documented by pre-World War II sound recordings. One is the actual historic chronology, people, and documentation of events as they transpired during the evolution of what would become known as the blues. The second is the research, reportage, and contextual analyses surrounding that historic chronology. The former exists only inasmuch as was revealed to and realized by the researchers (as well as what research experience researchers brought with them), leaving a vastly larger unknown. The latter gave rise to a cultural depiction as much myth as romantic primitivism. The two narratives are insoluble phases, where, at their interface exists the "truth" (whatever that may be).

Where is a starting point? In 1937, writing under a pseudonym for the left-wing publication New Masses, Columbia Records A&R man John Hammond, Sr. stated that "[Robert] Johnson makes Leadbelly look like an accomplished poseur." A year later, Hammond sought to feature Johnson in a concert he was producing at Carnegie Hall that December called "From Spirituals to Swing." Hammond sent a field representative to Mississippi to find Johnson and bring him to New York to perform only to learn that Johnson died in the previous weeks. For the concert, Big Bill Broonzy replaced Johnson in the program, with Hammond memorializing Johnson by playing two recordings ("Preachin' Blues (Up Jumped the Devil)" and "Walkin' Blues") of his songs for the Carnegie Hall audience. This is all twenty years before the American Folk Music Revival and a renewed interest in the blues.

Blues reportage and analysis began with publication of Samuel Charters' The Country Blues (Reinhart, 1959) and Paul Oliver's The Blues Fell This Morning: The Meaning of The Blues (Cassell, 1960). Interest in pre-World War II jazz and blues had already started to percolate among 78 RPM shellac collectors, many of whom began writing about the recorded music around that same time. In 1961, John Hammond. Sr. appeared again just as the the American Folk Music Revival was in full swing, convincing Columbia Records to release King of the Delta Blues Singers. While this recording went nowhere when released, it did strike the flint of British musicians like Eric Clapton and Keith Richards, who sung Johnson's praises loud and long. Robert Johnson became the poster child of the blues and the blues, for a second time, became a recorded commodity.

From then on, the myth surrounding Robert Johnson, and the blues in general, began to form, evolve, and, eventually, overtake all respectable music reportage. Each subsequent writer, writing about the blues, parlayed one error after another, until the myth became accepted as fact. A certain Romantic shadow shaded the blues from the historical truth: all in an effort to make the blues more attractive, mysterious, and, most of all, marketable. The contemporary profiles of these blues musicians, Johnson included, were anemically one-dimensional and of poor historical significance.

After 50 years of romanticised writing about the genre (e.g. Robert Palmer's Deep Blues: A Musical And Cultural History Of The Mississippi Delta (Viking, 1982), the blues received a long overdue critical reevaluation, revealing a story no less compelling than that originally reported, just more factual, scholastic, and rigorously researched. This most recent critical scholarship includes: Barry Lee Pearson and Bill McCullock's Robert Johnson: Lost And Found (University of Illinois, 2003); Patricia Schroeder's Robert Johnson: Mythmaking and Contemporary American Culture (University of Illinois, 2004); Elijah Wald's Escaping The Delta: Robert Johnson And The Invention Of The Blues (Amistad Press, 2004); Marybeth Hamilton's In Search of the Blues (Basic Books, 2010); Amanda Petrusich's Do Not Sell At Any Price: The Wild, Obsessive Hunt For The World's Rarest 78 Rpm Records (Scribner, 2014); Steve Cushing's Pioneers Of The Blues Revival (University of Illinois Press, 2014); Abbott and Sheroff's The Original Blues: The Emergence Of The Blues In African American Vaudeville (University Press of Mississippi, 2017); and Bruce Conforth and Gayle Dean Wardlow's Up Jumped The Devil: The Real Life Of Robert Johnson. These books all built on, and corrected, the previous 50 years of blues scholarship, clarifying much of the myth and superstition marring the official record.

For all of their best intentions, Paul Oliver and Mack McCormick efforts, collectively and individually, belong firmly in the early period of blues reportage not yet informed by future research. Where Blues Come to Texas, in context, diverges from its contemporaries is in the sheer amount of field work performed in preparation. That alone makes the historic content of Blues Come to Texas important as source material today.

A considerable portion of blues historians Alan B. Govenar and Kip Lornell's treatment of Oliver and McCormick's material is devoted to the story of the idea of the book, its original development, and how that idea was overwhelmed by a lack of technology, long-distance correspondence, personality clashes, and physical and mental illness. This introductory material goes a long way in explaining why, what writers initially knew in the 1970s and Texas Blues and McCormick's mythic biography of Robert Johnson, Biography of a Phantom, never saw the light of day. This ultimately is the more interesting story than the source material of the music and the artists themselves. Evidence of this is apparent in the fact that Blues Come to Texas as touted, in the introduction, should be seen as an "historic artifact" to be taken as presented like some dusty scripture found in crockery in some forgotten cave.

The text for this book was taken from the written draft of the book that Paul Oliver had on hand at the time this project was changing hands in the last decade, Oliver having died August 15, 2019 (and McCormick previously on November 18, 2015). The material presented in this "historic artifact" contained only Oliver's writing on the source material he had on hand at the time, the bulk of that research staying with McCormick and never given Oliver. The result is a mess, in content and organization, though a glorious one. Publication of Blues Come to Texas marks the end of a frustrating 40 year odyssey originally full of promise and breakthrough information for the blues community at large. It closes the book on uninformed hopes, unrealized promises, informing us that we are all too human. If this is what we have, we should be grateful for it as we could have received nothing at all.

The reference material found in Blues Come to Texas is rich in detail, albeit pedantically rendered and dry as the East Texas dirt from which it came. McCormick proved to be a successful field agent with no editorial ability and unrealistic aspirations. It was his charge to search and document every blues artist in Texas, a task immediately pruned to East Texas and areas beyond (parts of Arkansas and Louisiana). The stars of the book are Blind Lemon Jefferson (1893-1929) and Sam "Lightnin'" Hopkins (1912-1982). A good deal of text is devoted to a series of blues pianists from Houston's Fourth Ward. A plethora of material addressing the social mores of the period is presented, enriching the text with a necessary perspective not previously shared in such writing, sometimes too much.

This book is best viewed as reference material. That is, this book does not allow for breezy, half-attentive reading. The information is dense and hard to follow. It demands great attention from the reader. That said, there is much rich detail to be enjoyed and much lost to be grieved in this book. At least we know not to expect more.