By Troy Collins
December 16, 2011
Sign in to view read count 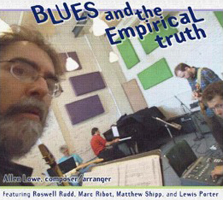 Operating on the fringes of the jazz establishment since the early 1990s, under-sung saxophonist Allen Lowe has earned meritorious praise for his distinctive efforts. It is his academic writings documenting the history of American folk music that have garnered him the most widespread critical acclaim however. Lowe's first foray into roots music, his 1994 album Dark Was the Night—Cold Was the Ground (Music & Arts), reconciled modernism with tradition, consequently inspiring his interest in scholarly dissertations like American Pop from Minstrel to Mojo: On Record 1893-1956 and That Devilin' Tune: A Jazz History 1900-1950. No stranger to ambitious projects, Lowe's recent excursion into the blues, the wryly titled 3 disc set Blues and the Empirical Truth, encapsulates myriad variations on the timeless form. Expertly realized by a rotating roster of talent, the diverse line-up features all-stars like Marc Ribot, Roswell Rudd and Matthew Shipp working alongside a handful of lesser-known, but talented local musicians from Lowe's adopted hometown of Portland, Maine.

Recorded in Brooklyn and Portland, Lowe arranged an assortment of instrumental configurations to extrapolate venerable blues tropes—abstracting and reconfiguring the standard form according to his capricious whims. The sheer volume and variety of material is staggering (52 cuts over three and half hours), sprawling from lyrically austere chamber-like vignettes to rousing punkish tirades. Having recently switched from tenor to alto (in addition to playing C melody saxophone and a bit of primitive but effective guitar), Lowe's soulful tone and probing phrasing serves as the date's unifying factor, instilling a sense of rough-hewn consistency to the eclectic proceedings.

Though the collection is filled with an endless array of stylistic detours—far too many to list—the stalwart contributions of Lowe's sidemen cannot be understated. Ribot's spiky fretwork, Rudd's blustery vocalisms and Shipp's elliptical contributions (on piano and Farfisa organ) imbue the set with expressionistic ardor, while the efforts of Lowe's Maine-based cohorts find concordance in their amiable rapport. Key among them is guitarist Ray Suhy, whose scorching leads veer from Delta-inspired anguish to metallic posturing. Unfortunately, Jake Millet's electronic percussion sounds at odds with the session's stripped-down aesthetic; his digital drums' lacking spatial presence and artificial decay is suitably futuristic, but ultimately proves more distracting than engaging.

Ironically, Wynton Marsalis is one of the key instigators of this vanguard project; an argument with Marsalis over the role of minstrelsy in African-American musical history indirectly led to Lowe's publication of Really the Blues? A Blues History, 1893-1959 (encompassing a 36 CD set and an 80,000 word essay!), which subsequently resulted in this unique exploration of the malleable idiom—in all its many guises. Endlessly revealing, Blues and the Empirical Truth is a fascinating journey into one man's vision of modern music's most basic and resilient foundations.

CD1: Blue Like Me, Pt. 1; Twilight at Terezin; No 5 No Flats No Sharps Blues; (Bull Connor Sees) Darkies on the Delta; Huh/Sublime and Funky Love, Pt. 1; No More Blues (the Sins of the Mother); Manhattan Moan; Carnovsky's Blues/The Whores' Dance; The Children of Ella Mae Wiggins; Blue Interlude 1; Ras Speaks 1; Pete Brown's Blues; Sweet Joe Pye Weed; Mama, Mercy Comes in Spurts, Pt. 1; In a Harlem Ashram; Five out of Four Blues; Blues in Shreds; CD2: Blues and Transfiguration; I Hate Blues; My Clinch Mountain Blues; The Trapeze Artist's Anxiety and the First Note the Jazz Band Blows--or: Jim Crow Eyes in No Man's Land; I Will Sing Me a Parable Under Water; Temperance March; Entrance No Exit; Electro Convulsive Blues; In Da Sunset of Your Love; Speckled Shaw Crippled Pete Boogie; Mama, Mercy Comes in Spurts, Pt. 2; The Lost; Seasons of the Witch Doctor; Pauli Murray, at the Back of the Bus, Suddenly Realizes She Has the Blues; I Hate Blues, Too; Blue Like Me, Pt. 2; Blue Interlude 2; My Confession: Ode to Doris Day (The Last Embrace); CD 3: Near a Baptist Meeting; Old Man Blues; Elvis Died with His Sins Intact; No 5 No Flats No Sharps Blues, Pt. 2; The Moon is Setting on the Whore Eye Zone; One Trane Running; Ras Speaks, Pt. 2; Williamsburg Blues; Cold Bed Blues; Blue Collage: Don't Put Off Salvation; Schildkraut on 52 Street; In the Realm of the Blue; Reconstruction Dreams (the Ballad of Blind Tom); Blood On the Mirror; I Am A Delta Terrorist; Ras Speaks, Pt. 3; I Hate Blues Again.