By Bruce Lindsay
December 16, 2011
Sign in to view read count 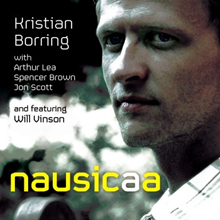 Nausicaa is the debut album from London-based Danish guitarist Kristian Borring. It's an assured and confident debut, demonstrating Borring's talents as a composer and player. There are some complex time signatures on display, but they're never overdone and the music remains accessible from the get-go.

Borring studied guitar in Holland and in London, gaining a Masters degree from the Guildhall School of Music in 2006. Since then, he's worked with a diverse range of European jazz musicians including saxophonists Tim Garland and Bobby Wellins, bassist Jasper Høiby, a fellow Dane, and vocalists Monika Lidke and Christine Tobin.

It's notable that many of Borring's past musical partners are strongly melodic performers, for this is also one of the guitarist's strengths. He's a melodic, precise player with a rounded, open, tone—akin to Irish guitarist Mark McKnight—and his compositions also focus strongly on melody. Pianist Arthur Lea shares this focus and proves himself to be an excellent interpreter of Borring's tunes. Bassist Spencer Brown and drummer Jon Scott are sympathetic rhythm players but they are also capable of more assertive playing, giving the music an added edge that ensures it doesn't become too gentle or laidback. The two are particularly effective on "The Famous G," laying down an infectious groove underneath Borring's flowing lines.

Saxophonist Will Vinson—born in London but now based in New York—joins the quartet on three tunes, his punchy but fluid alto beefing up the sound on the swinging "Clapton Cowboys" and delivering some nifty unison lines with Borring on the bop-ish "Last Whistle." On the gentle "Nausicaa," he captures the mood of the piece with a more plaintive and reflective approach.

The album closes with "Nausicaa—reprise." It's a short piano and guitar duet that emphasizes the melody's inherent sadness: a lovely if somewhat downbeat ending to Borring's impressive first release.