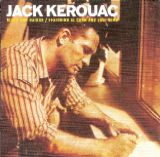 I discovered jazz and Jack Kerouac at roughly the same time in my teens back in the early 1970s, when his seminal novel On The Road (Viking, 1957) hooked me into the bohemian world of jazz clubs, intense friendships and the never ending highway under wide open skies described in its pages.

It barely mattered that the quick fluid prose in which this hedonistic manifesto was rolled up in didn't always make sense—it was all about feeling something rather than necessarily understanding it. "You dig?" wasn't a question as much as a state of mind. That same sensibility applied to jazz and thus, for me at least, Kerouac and jazz were inseparable. Therefore when it came to him reading and /or improvising his words with jazz musicians it would obviously be a match made in heaven. Well, as this reissue demonstrates, there's often quite a gulf between theory and practice.

Kerouac had already begun his somewhat unsteady collision course with celebrity when he wound up in a recording studio in 1958 with Al Cohn and Zoot Sims. With producer Bob Theile staring out through the glass, the trio first laid down "American Haikus." Originally released in 1959, it followed on from his previous collaborations with pianist and TV presenter, Steve Allen, Poetry of the Beat Generation (Hanover, 1959). Whereas that had largely consisted of Kerouac reading novel extracts over a jazz backing, this record attempted to connect the words directly with the music; Jack riffing quick bursts of bop-prose followed by skirmishing from Cohn and Sims.

Kerouac can often be heard giggling off-mic at their piquant responses, as though he can hardly believe his luck at being in studio with them. Though he's clearly enjoying it, the playing is waiting to be ignited rather than actually being on fire.

"Hard Hearted Old Farmer" has Al Cohn switch to piano to back Kerouac's liquor-lubed sprechtgesang for a tentative blues. Their hesitant delivery doesn't improve until Sims eventually pitches in with a few well-chosen licks.

Ironically, when Kerouac does find his rhythm much later, midway through "Poems from the Unpublished Book of The Blues," the saxophones meander distractedly in the background, increasing the suspicion that nobody on the date really believed in what they were doing.

This seems confirmed when, on "Old Western Movies" (one of the two bonus outtakes presented from the original sessions), as Kerouac is browsing through his poems trying to figure out what to do next, Theile is heard in the room commenting "It's one of the best jazz dates I've heard in years." The howl of incredulous laughter from the guys in the next room is tainted with a cruel irony.

Although the words themselves explode and fly with his trademark wildcat imagery, Kerouac's delivery is leaden and flat. Rather than dance with music, he stands squarely on its toes. Period charm aside, Ellington and Irving Mills were right: it don't mean a thing if it ain't got that swing.

American Haikus; Hard Hearted Old Farmer; The Last Hotel & Some Of The Dharma; Poems from the Unpublished Book of The Blues; Old Western Movies; Conclusion Of The Railroad Earth.