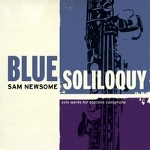 Sam Newsome's Blue Soliloquy is not just a recording of solo soprano saxophone pieces; it's an eloquent and daring discourse on the scope of possibilities that the instrument offers. As the CD title and song names suggest, the blues forms the foundation for everything Newsome writes and plays. He depends heavily on multiphonics but this complements, rather than submerges, the smooth, rich resonance of his overall tone.

There are Gershwin-esque flourishes in tunes like "Blues for Robert Johnson" and "Blue Swagger" and Newsome's virtuosity sometimes makes it sound like there are two people playing. And multiphonics are not used just for their own sake; they're the "amen" notes in the call-and-response scheme of "Blue Pulpit," and carry the soulful and ambitious "Blue Sunday." On several tunes—"Blue Beijing," "Blue Doppler Effect," "Blue Hum of the Holy Breath," "24 Tones"—Newsome also employs the technique of circular breathing. While some players do this strictly as a parlor trick, Newsome embraces it on each song as a challenge, like a visual artist sketching a detailed landscape from a single unbroken line.

Perhaps the most intriguing aspect of Blue Soliloquy is the way Newsome explores the soprano's imitative range. On "Blue Mbira," he manipulates his mouthpiece to capture the sound of an African thumb piano, produces flute pitches on "Bansuri Blue" and "Blue Bamboo" and echoes the texture of the human voice on "Throat-Singing Blues." None of these is a stone-faced impersonation. Newsome swings the whole time, even sending out intermittent winks in the form of tenor-like honking. The disc ends with an interpretation of "Blue Monk," the reworked chord structure and melody giving Newsome ample room to expound wonderfully upon the pianist's point.

Newsome pushes creative limits on this stunning work and does so with startling effect. In his adept hands, the soprano becomes truly organic. Who knew that an instrument could have so much personality?