Home » Articles » Dave Morgan: Blue Is More Than a Color

Dave Morgan: Blue Is More Than a Color 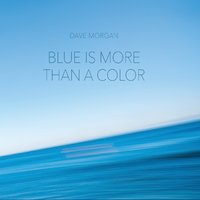 If nothing else, bassist-composer Dave Morgan's album, Blue Is More Than a Color, affirms that big-band jazz is alive and well in the Akron, Ohio, area. Perhaps more than coincidentally, Morgan's large and well-drilled ensemble plies its trade on a regular basis at Akron's Blu Jazz Club whose patrons may presumably hear previews of the seven original compositions by Morgan that comprise the sum total of a colorful and provocative studio session.

Morgan's compositions are resourceful and modern, using every facet of the orchestra to reconcile, in his words, "the energy of the Mingus band, the finesse of the Maria Schneider Orchestra, the grandeur of the Pat Metheny Group, the melodicism of Kenny Wheeler and the humanity of Charlie Haden's Liberation Music Orchestra." Of course, the degree to which Morgan has succeeded rests in the mind, heart and ear of the listener. In the opinion of some enthusiasts, if he and the band should fail to reach such an ambitious goal, it is certainly not owing to any lack of diligence or imagination.

On the other hand, there is an almost total absence of the sort of unbridled energy and drive that were hallmarks of the storied Big Band era, a liability shared with many of Morgan's contemporaries including those touched on earlier. The qualifier "almost" is necessary as the band does swing in time-honored big-band tradition on the last number, "Cosmology" (YouTube clip, below), burning rubber behind Dave Kana's robust tenor solo. Prior to that, tempos are unhurried to moderate, starting with the perceptive "Point of Beginnings," which uses Amanda Powell's wordless vocal to good effect, as it does a muscular solo by tenor Pete Mills. The open-hearted title song uses its more than twelve-minute playing time to encompass sharp ensemble work and eloquent solos by trumpeter Jack Schantz and trombonist Chris Anderson. The sound of hands clapping introduces the frisky "Jungian Slip," on which alto Nathan-Paul Davis and trombonist Sam Blakeslee share solo honors, as do clarinetists Tom Reed and Brad Wagner with Schantz on the melodious bossa, "Coisa Nova."

Morgan pays homage to the aforementioned Charlie Haden on "In This Moment," a ballad whose lyric is printed in the liner notes but unsung on the album. Tenor Chris Coles and pianist Theron Brown are the soloists. Morgan solos only once, with soprano Howie Smith, on "You Never Were," the leader's seductive restatement of Jerome Kern & Oscar Hammerstein's exquisite standard, "All the Things You Are." Although it's not an emblematic big-band album, the admirably performed and recorded Blue Is More Than a Color is sharp and persuasive on its own terms.

Point of Beginning; Blue Is More Than a Color; Jungian Slip; Coisa Nova; In This Moment; You Never Were; Cosmology.