BY NATHAN HASELBY
December 27, 2005
Sign in to view read count 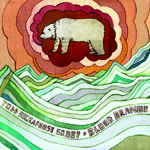 The young composer and bassist Todd Sickafoose waited a full five years to put out his second release, Blood Orange, following his debut, Dogs Outside (2000). Considering the advances he has made as a composer and arranger, the wait is worth it. Sickafoose still writes pensive mainstream jazz enriched by free improvisation, but his tighter new group makes possible writing which demands no less from individual players and gets much more from the whole.

To be fair, Dogs Outside was a ten-hour studio effort with a strong but uneven lineup. Peter Epstein for one sounded too polished and brilliant to blend in fully with that album's sparse arrangements, which would have benefited from the additional keyboards and electronic effects Sickafoose now incorporates. Simultaneous soloing, a success on both recordings, had clear, even cautious, boundaries on Dogs and never achieved the boldly unified sound that sustains Blood Orange. Blood still features trombonist Alan Ferber and guitarist Justin Morell, but with Ches Smith on drums and Ben Wendel on tenor, the sound is more aggressive and evenly matched, two gains that serve the composer well.

Perhaps Sickafoose needed this particular ensemble to fully realize the richly interactive overlapping parts of Blood Orange. The title track is a fine example: in the middle of Ferber's mounting solo, a celeste enters to double the trombone for several bars before dropping out for a backing saxophone line, which is in turn doubled by Ferber after a few more bars of soloing. Thoughtful use of structure like this lends direction to every song and a satisfying pace and consistency to the entire recording.

It is no accident that the composer maintains a focused aesthetic from beginning to end. The track listing alone shows the four-part "Serpentine" spaced throughout the album by intervening songs. The closing "Resolve" is alone in standing outside of this established musical territory, but it seems to point deliberately towards heavier use of electronics in the group's future. Even those few listeners who were not impressed by Dogs Outside are likely to be wowed by the rapid development of this gifted young composer. Hopefully his next release will not take another five years.