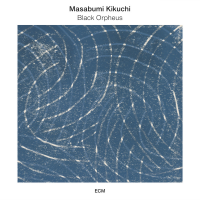 Black Orpheus, the solo piano CD from Japanese-born pianist Masabumi Kikuchi, may be the starkest, loneliest music in the world.

Masabumi Kikuchi (1939-2015) was a versatile, if ultimately idiosyncratic artist. Early in his career he worked with a panoply of mainstream music makers, everyone from drummer Elvin Jones, to producer arranger Gil Evans, tenor saxophonist Joe Henderson and pianist/composer Mal Waldron. But he proved—from 1990 on—too individualistic, a musician with no technique (or so he said), who never felt possessed of virtuosity.

But what he did have—developed post-1990, mostly in his work with drummer Paul Motian, in the Tethered Moon group on a series of albums for the Winter and Winter label—was a completely original way of expressing himself that culminated with a career highlight, the marvelous trio CD under his name, Sunrise (ECM Records, 2015), featuring Motian and bassist Thomas Morgan.

There is a sense with Sunrise that Kikuchi was withdrawing, going into himself in search of a personalized form of self expression. His days of collaboration—again, with the exception of Paul Motian—were over. He never achieved widespread fame or monetary success. But Sunrise said he'd found himself—gorgeously spare, deeply introspective, full of the patience and serenity of the success of a lifelong search for self-expression.

Black Orpheus is the document of a 2012 solo piano concert in Tokyo's Bunka Kaikan Recital Hall, recorded three years after Sunrise. It would be hard to find a more personal, more ethereal or lovelier example of finely focused artistic self-expression.

This is mostly in-the-moment improvisation. There are eleven tunes, nine of them labeled simply "Tokyo Parts I -IX, with a perfect centerpiece for the show: Luis Bonfa and Antonio Maria's "Black Orpheus," and the closer, "Little Abi," a Kikuchi original written for his daughter and once recorded by drummer Elvin Jones.

Music for solo piano is often described as "searching." This solo work—one of Kikuchi's last public performances—has the feeling of a search ended. He found what he was listening for. This translucent, beyond-category-and-time sound has an eternal feel. It is often solemn, occasionally slipping into jumbles of notes stumbling down the scale, before shifting back to a spacious placing of single notes, a single ringing chord. It sounds as if Kikuchi had tapped into immutable truths in a place of desolate solitude resulting in a serene loneliness and a peculiar personal enlightenment.