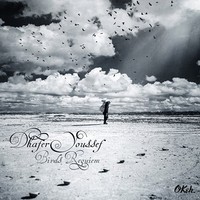 Blending Souls & Shades touches your heart, emanating from Youssef's sprawling vocals, executed with conviction and soulfulness, followed by trumpeter Nils Petter Molvaer's spiraling lyricism, leading the band into a mid-tempo rock groove. Here, Youssef's deft oud work conjoins with guitarist Eivind Aarset's succinct chord voicings as they stagger the pulse atop drummer Chander Sardjoe's thick back beats. But the guitarist turns up the heat, casting an edgy outlook as the ensemble soars to a zenith towards the end, and dovetails a buoyant Arabic melody into the finale. Hence, this piece and others transcend the customary persuasions of world music, mainly due to the seamless coalition of multiple Eastern and Western inferences. On the ensemble-based pieces no particular genre outweighs the other, bearing a multifarious production that uncovers a consortium of unforeseen surprises.