By DAN MCCLENAGHAN
November 26, 2006
Sign in to view read count 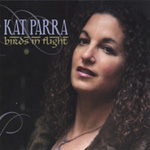 Birds in Flight, San Francisco Bay Area vocalist Kat Parra's debut release, could be tagged as Latin jazz, but it proves itself a lot more than that. She stretches the boundaries right off the bat by singing "Mais Que Nada," a much-recorded Brazilian song, with an Afro-Cuban/samba rhythm. The delivery at first is traditional, until Pat Parra, Kat's son, raps in on a samba hip-hop groove, fronting a slapping percussion backdrop that fades back into a swirling arrangement that's lush with flute and strings.

This wonderfully produced set brims over with exquisite arrangements, mostly by trombonist/producer Wayne Wallace and pianist Murray Low, who mix the colors of strings, multiple percussion, and brass and reeds into a polished and joyous amalgam. "Dame La Llave," a charango tune, bubbles to life on an infectious groove that leads into a lilting take on the American Songbook classic "Softy As in a Morning Sunrise," danzón and cha-cha style. The sparely and beautfully arranged "Alfonsina Y El Mar" is a jazzy flamenco piece.

The set's title tune, penned by Kat Parra, took fifth place in the 1999 Latin Jazz Category of the John Lennon Songwriting Contest. This hard-driving salsa tune was inpired by the breakup of her marriage. Ellington's "Caravan" gets an exotic treament with the inclusion of tablas (Ravi Guatala) and dumbek (Katja Cooper). Parra sings "Kuano El Rey Nimrod," a traditional Sepharic tune, in Ladino—a dying language of the Spanish Jews—in front of exotic rhythm and assertive strings, and she closes the disc with "Quizas Porque," which has a gorgeously sweet melody.

Birds in Flight is a remarkable debut from a singer with a pure, straightforward delivery and deft songwriting skills, immersed in a cool wash of intricate arrangements.