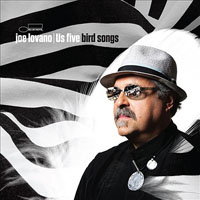 Sax giant Joe Lovano has blown next to a bevy of jazz greats, and been applauded as soloist and leader throughout his nearly 40-year career. While it might seem surprising that audiences had to wait until his 22nd album for a tribute to Charlie Parker, Bird Songs demonstrates, once again, that Lovano does things his own way, and that great things are worth waiting for.

Lovano and his Us Five band cover tunes that "Bird" penned and played, forever changing the shape of jazz. Many of these tunes started as improvisations, evolving into test pieces or shredding grounds for beginners and pros alike. Lovano's technique impresses regardless of context, but Bird Songs flexes much more than his fingers. Lovano deconstructs Parker's angular melodies and plucks them out of well-worn settings: a turnaround phrase on "Passport" morphs into an insistent Latin vamp; "Ko Ko" is fractured across keys and tempos; and "Donna Lee" is spun into a spacious ballad, while "Moose the Mooche" elongates into a playful stomp.

These wide-open interpretations leave plenty of room for Us Five's empathic interplay and arresting solos. Otis Brown III and Francisco Mela both play drums, weaving a polyrhythmic tapestry that adds complexity without overwhelming the mix. Pianist James Weidman strolls over off-beats on fast numbers like "Passport," while channeling Bach and Bill Evans in lucid, reflective lines on "Lover Man." Bassist Esperanza Spalding is a subtle, sensitive and swinging presence throughout, with solos on "Lover Man" and "Dewey Square" spilling over with ideas. Spalding and the rest of Us Five know when to reinforce and when to react—no mean task, next to the group's endlessly imaginative leader.

From straight-ahead bop on "Passport" to rich, cloudy roulades during a hymn reading of "Yardbird Suite," Lovano combines the harmonic and rhythmic audacity of modern jazz with the warmth and directness of the music's early days. Humor and curiosity mark even passing phrases. His gauzy, pulsating tenor sax is featured on most tunes, yet he indulges in Jackson Pollock abandon playing the twin-horn aulochrome on "Birdyard," its spiky lines and acrid harmonics flowing as easily as the rounded, sonorous tones he sings on mezzo soprano sax for "Lover Man." There may be few obstacles for a player of this caliber, yet Lovano continually challenges both himself and his colleagues.

How do you honor someone who gave the world such original, exciting music? By returning the favor. Bird Songs is a fitting tribute to an artist who never wanted to play something the same way twice.