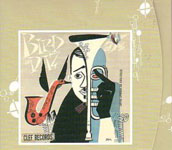 A 1950 recording released on a 10" LP in 1952, this session was conceived by Norman Granz as an opportunity to win for Charlie Parker a larger audience by showcasing him in the company of jazz stars playing "pretty tunes written by good songwriters. But with the exception of "Melancholy Baby" these are exactly the same kinds of bebop heads based on blues and "Rhythm" chord changes that Bird had recorded at Dial and Savoy. What distinguishes the album—apart from the singularly aggressive and competitive playing of Parker and Dizzy Gillespie on their last studio session—is the presence of Thelonious Monk and Buddy Rich.

In the liner notes, James Patrick laments the neglect this session has received, then observes that though Parker, Gillespie, Monk, and bassist Curley Russell "play beautifully," Buddy Rich is "intrusive" and should have been replaced by a "Max Roach, Roy Haynes, or Kenny Clarke. Fine, then we have another recording practically indistinguishable from the earlier Dials and Savoys.

Rich may be less flowing and propulsive than the aforementioned bebop drummers, but he's definitely not intrusive. In fact, his swing-era symmetry and unfailing metronomic pulse bring a different dimension to the music and complement, above all, Monk's clockwork. It begs credulity that a musician like Monk would have hung around the studio if he didn't appreciate Rich's time. (In the early '70s at Chicago's Plugged Nickel I saw Monk fire a drummer in the middle of the second tune of the first set!) In fact, the "world's greatest drummer convincingly retains his title on Rich Versus Roach (Mercury, 1959), unless you fault him for machine-like precision.

Which is not to say a case can't be made against him. After 1942 Sinatra never recorded with him and brought along his own drummer, Irv Cottler, even when performing with the Rich band. Rich didn't have the big back-beat, the "deep stroke," that Sinatra derived his energy and swing from. And Rich could be so symmetrical and metronomic, so unforgiving, that much of the expressive fire generated by a soloist working with an Art Blakey or Elvin Jones would fail to ignite in a small Rich ensemble.

But just when you start to question the eminence of Rich, you rediscover all of those Verve recordings he made, not just with Diz and Bird but with Lester Young, Nat Cole, Oscar Peterson, Art Tatum, Lionel Hampton, Louis Armstrong and Ella Fitzgerald. All of it so tasteful, supportive, swinging and even elegant. The man encompasses as much of the tradition as Miles Davis, though he rarely gets his due.

Whether Parker and Gillespie succeed because of or in spite of Rich matters less than the evidence on the record. Listen to all eleven takes of "Leap Frog." Even though seven are false starts, Bird and Diz are going after one another with such ferocity it's quite a challenge to determine what caused Bird to abort seven of the attempts so quickly, providing a fascinating glimpse of the creative process as practiced by two of the indisputable musical geniuses of the 20th century.