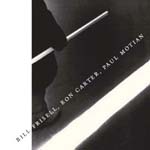 This self-titled debut by an all-star trio of acknowledged masters was recorded live in the studio with no rehearsal. Guitarist Bill Frisell has played with both bassist Ron Carter and drummer Paul Motian on numerous occasions, but never have all three joined forces before.

Carter's rapport with Frisell was established years ago when the first played together in drummer Joey Baron's Baron Down band. Frisell was a charter member of Motian's longstanding trio with saxophonist Joe Lovano, which resulted in some of the most exploratory music of Motian's career. Together, these three players take a nuanced and respectful look back on some standards and a few originals in a program dominated by lyrical maturity.

Frisell's development over the years has occasionally puzzled and confounded his longtime fans. Where he once tore it up with John Zorn's Naked City and on his own early records, he now generally forgoes that wild and wooly frenzy for a more nuanced and reserved aesthetic. His occasional forays into skronk only complicate matters for those who yearn to hear the old Frisell. He still has the means to bring the noise, yet he rarely chooses to do so. In the interest of full disclosure: Frisell does not engage his distortion pedal on this album; other than a bit of delay and some odd harmonic devices, this is a stripped-down set. Those looking for raucous free improvisation are recommended to look elsewhere.

However, listeners seeking rich lyricism and unconventional beauty are advised to investigate further. The album is not merely a spotlight affair for Frisell—Carter and Motian are equal members in the cooperative. Both are subtle, non-flashy improvisers. Together with Frisell, they engage in a genteel bout of casual, open-ended exploration of familiar themes.

"Eighty-One" and a pair of Thelonious Monk tunes are given brisk, swinging treatments, a bouncy interpretation of "On the Street Where You Live" delivered with buoyant mellifluousness. Conversely, "You Are My Sunshine" is taken at a glacial pace, re-imagined as a somber dirge, while the traditional "Pretty Polly" is given Frisell's patented delay pedal treatment, recasting this classic folk tune as ethereal futurism. The guitarist's "Monroe" embodies all the best characteristics of his interests in Americana, blending folksy pastoral traits with optimistic tunefulness.

A gorgeous, restrained meeting of the minds, this recording embodies fine, subtle improvisations from three of today's most iconic players.