By Dave Hughes
December 1, 1997
Sign in to view read count 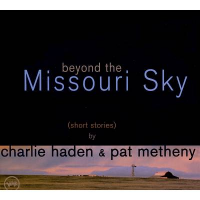 Charlie Haden and Pat Metheny, both Missouri natives and best friends, join forces for a mostly acoustic duet album. All of the tunes were recorded as duets for acoustic bass and guitar, and on roughly half of the tunes, Metheny overdubbed some "orchestral" backgrounds on synclavier or an additional acoustic guitar part. But these additions simply add texture and shading, and do not overplay the primary voices of the bass and guitar.

Sytlistically, this album is a departure for both artists, especially Metheny. Haden dubbed this music "contemporary impressionistic americana," which I think describes it very nicely. While it's not a jazz album at all, in the traditional sense, there is nice improvisation and interplay throughout. There's sort of a simple American heartland folk feeling to many of the tunes, but the songs are not simple by any means. The chord voicings and harmonic sense these two display is uncanny, and they bend and flex the melody and solo lines to create expressive and contemplative musical statements.

It's a wonderful album, but you have to be willing to approach it on its own terms, rather than expecting it to be like a Pat Metheny Group or a Quartet West recording.