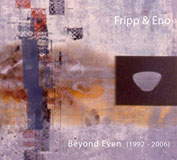 It's hard to believe that it's been thirty-five years since King Crimson's Robert Fripp teamed with keyboardist/multi-instrumentalist Brian Eno for the groundbreaking No Pussyfooting (EG, 1973). That album introduced the concept of Frippertronics to the world; a method of using two tape recorders and one guitar to create an ever- expanding orchestral approach that Fripp would, with the help of increasingly advanced technology, evolve into Soundscapes, featured on albums including the deeply resonant Love Cannot Bear (DGM, 2005). Eno has gone on to become a first-call producer for artists including U2 and Peter Gabriel, as well as a wide-reaching innovator of stylistic markers including Ambient Music.

Fripp & Eno have continued to work together over the years, but The Equatorial Stars (DGM, 2004) was their first release since Evening Star (EG, 1975). The Equatorial Stars was largely the nexus point where Eno's Ambient Music and Fripp's Soundscapes met but Beyond Even (1992- 2006), a collection of various collaborations over a fifteen-year period, proves Fripp & Eno to be about more than tranquil and largely non-rhythmic aural landscapes. While there's no shortage of soothing music on these sessions, there's also some of their most assertive music on record, with the possible exception of the four-part 'Healthy Colours' suite, from the compilation The Essential Fripp and Eno (Virgin/EG, 1994).

The first sound heard on Beyond Even is, in fact, the rhythm loop of 'Ringing Beat' that is gradually augmented throughout the track. Uncharacteristically propulsive it may be, but it also remains characteristically ethereal, with Fripp's emergent guitar back in the mix along with multiple sound washes, layered over a repetitive bass pattern. 'Sneering Loops' revolves around a distorted guitar line from Fripp that's rhythmically staggered, creating a sense of unease that gradually builds as the slightest variations are introduced.

The groove-laden but sonically atmospheric 'Tripoli' would fit comfortably on one of Fripp's laboratory-like ProjeKcts. The same can be said for the viscerally rhythmic 'The Idea of Decline,' with Fripp emulating a vibraphone before heading into distorted guitar territory, and the closing 'Criss Cross in Lust Storm,' with ex-King Crimson touch guitarist Trey Gunn guesting on what is undoubtedly the most jaggedly aggressive piece Fripp & Eno have recorded to date.

There are tracks that approach the ambience of Equatorial Stars, specifically the spacious 'Behold the Child' and near-stasis of 'Deep Indian Long.' This is music that could only be constructed in the studio, but that shouldn't suggest sterility or over-consideration. 'Timean Sparkles' and 'Hopeful Timean'—the latter featuring guest bassist Tim Harries—are Fripp & Eno at their most beautiful.

The initial run of Beyond Even is a limited two-CD set; the first, with all but 'Criss Cross in Lust Storm' segued together (this will be the disc used in future single-disc editions); the second, with each track distinct and separate. Either way, Beyond Even is Fripp & Eno's most diverse album to date, and fans can look forward to their thirty-five year circle made complete when an expanded reissue of No Pussyfooting is released in 2008.