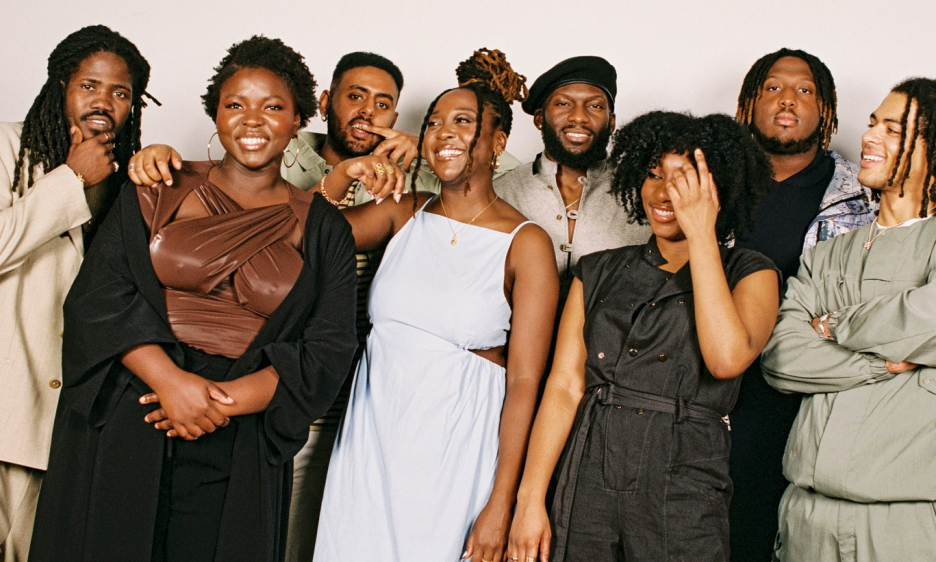 If you were to bring a West African drummer together with a black person from Venezuela, they’ll be able to groove, and understand each other, even though they may not be able to speak to each other.
—Sheila Maurice-Grey

London-based octet Kokoroko has been led by trumpeter-vocalist Sheila Maurice-Grey since she formed it in 2014 with percussionist Onome Edgeworth. The band's original idea was to update Afrobeat for a 21st century audience, inspired by the likes of Ebo Taylor, Tony Allen, and Fela Kuti. It was the extraordinary public reaction to their first release—a single track on the Brownswood Recordings sampler We Out Here in 2018—that catapulted them to fame: "Abusey Junction" has received 48 million YouTube views to date. Since then they have chalked up a number of other successes: in 2020 they were invited to perform at the BBC Prom season at the Royal Albert Hall (albeit without an audience) and won Best Group at the Urban Music Awards. The following year they were named Jazz Ensemble of the Year at the Parliamentary Jazz Awards.

The band's line-up, which had been through a number of changes over the years, stabilized during the pandemic, and now their sound is evolving. It has always been a mixture of traditional Nigerian music, jazz, funk, and Ghanaian highlife. It's a blend that perfectly expresses the cultural diversity of modern London, including its long-established traditions of dub and soul. As Maurice-Grey explains, "London is not just one culture, there's so many different pockets of culture." But the enforced lay-off from gigs gave the band two years to write and record new material, as well as allowing individual members to work on their own side projects: Maurice-Grey, for example, is also a member of the bands Nerija and SEED Ensemble. Kokoroko, meanwhile, are back in action this year with a new single, "We Give Thanks," an international tour, and, on August 5, a new album: Could We Be More.

If Kokoroko has a signature sound, it's the rhythm section setting things up with a soft, hypnotic, undulating groove, followed by the three-woman horn section with the tune, and a little later, the same three singing a refrain in harmony. Maurice-Grey has always wanted to establish a clear, instantly recognizable sound for Kokoroko, and nowadays she has her ears fixed on American funk and soul.

"When you listen to Kokoroko, it's not necessarily Afrobeat," she points out, "although that's a strong influence, and the main reason we came together, but there are so many other things that you hear in the music, especially with this new album. It's not Afrobeat any more, as you can tell when you listen to 'Something's Going On.' We're reintroducing ourselves to the world as a band who have so many influences from the past and trying to make our own sound, but still trying to draw people back to those influences and those stories that are very important to our journey and who we are today."

Maurice-Grey is a church-goer from a family of academics. Her mother is from Sierra Leone, her father from Guinea-Bissau, and her step-father from South Africa and Zimbabwe. The perfect background, in other words, for taking a pan-African approach to music. But her family at first told her she should at least do some teaching or something else to earn a living, and keep music as a hobby. Kokoroko, however, is a word from the Nigerian language Urhobo meaning "Be strong." With this in mind, the only thing that was ever likely to derail her music career was her talent as a visual artist; there came a point where she had to choose between that and music. She was urged to go to art college. One teacher told her: "Music will always be there, but that art college experience is for now. Then you can do music on the side." Looking back, it was the best piece of advice she ever received, although not as her elders intended. For musicians from John Lennon to Ray Davies, from David Bowie to Ian Dury, art college in the UK has been the place for experimentation in music. At Camberwell School of Art Sheila Maurice-Grey had the time and freedom to do what she wanted to do, before the usual pressures of adult life and responsibility took over. It was also where she met many of her lifelong friends and future collaborators.

She had grown up surrounded by music, initially from going to church and then from her own natural curiosity. "I messed around on lots of different instruments, just for fun... The schools that I went to all had a really good music program. I remember at primary school I would play steel pan, then at the weekend I would go to keyboard lessons. So all of that adds up. And then my mum was very encouraging. She really wanted me to play whatever I took an interest in." She started playing trumpet aged 12, having initially wanted to play piano. Her music teacher at school urged her to try out the brass instruments instead. Her choice of trumpet was a practical one: it was the smallest and most transportable of the bunch. She could get a sound out of the trombone, but found it just too big for comfort. Not that learning to play trumpet was straightforward. "It's is a difficult instrument, for sure. It's not forgiving at all. I wish I could say it's easy, but it's not." But she is stubborn by nature. And luckily for her, the school— Charles Edward Brooke in Camberwell, south London, a Church of England school now called Saint Gabriel's College—had the resources to teach music at the time. "My generation were the last that had funding. I got free music lessons until I was 18. I had access to a trumpet as well. I reckon if I had to pay for trumpet lessons or a trumpet, I wouldn't have been able to do it."

At the age of 14 or 15, she went on a school trip to see Hugh Masekela play at the Roundhouse, with the UK band Jazz Jamaica also on the bill. The school had organized backstage passes, and she got to meet Jazz Jamaica members Gary Crosby, Denys Baptiste, and American expat trumpeter, the late Abram Wilson. Crosby, who also runs the groundbreaking jazz education project Tomorrow's Warriors, is constantly on the lookout for new musical talent. As time went by, Maurice-Grey began hearing from friends like trombonist Nathaniel Cross and trumpeter Mark Kavuma how they were learning to play jazz with Tomorrow's Warriors, and finally joined up four years later, while still working on her art during the week. Crosby found a trumpet for her to play, since she didn't have one of her own.

"The great thing for me about Tomorrow's Warriors was that after the formal sessions, which ran from 10am to 4pm on Saturdays, the students would stay and hang until the building closed. That energy, that community, that genuine friendship between people is what created the vibe. It was a space where you could just share music." Her thirst to learn was so great that she would sometimes follow her friend Nubya Garcia to the prestigious Trinity Laban conservatoire and sneak into the classes. Eventually the progress she made at Tomorrow's Warriors secured her a place at Trinity herself.

Her travels to different countries in Africa have strengthened her understanding of how the music migrated across the globe aboard the slave ships. Once the original peoples of Africa had been dispersed across the New World, so a new culture had to be created, albeit rooted in where its inventors were from. "For instance the Yoruba music and culture is very strong in Brazil, and in Cuba, and so many other places. The musical and rhythmic patterns that you hear in the Congo are very strong in those countries. So there's a language that's automatically understood. It's almost like an ancestral understanding— understanding where the music came from, and understanding the heart and spirit of the music. If you were to bring a West African drummer together with a black person from Venezuela, they'll be able to groove, and understand each other, even though they may not be able to speak to each other."

The West African influence in Kokoroko's music is very clear, but living in London has made its own strong impression. "We've all grown up in London, but we've grown up listening to different types of music. A big part of Kokoroko is jazz and improvised music." Her involvement with yet another youth arts organization, Kinetica Bloco, got Maurice-Grey listening to funk and Brazilian music. (She now conducts masterclasses there alongside the likes of Ruben Fox, Claude Deppa, and Mark Kavuma.)

Having already achieved so much, where do Kokoroko's go from here? "At the moment our role models are the likes of James Brown and Earth, Wind & Fire— those old-school bands who went on the journey of developing their sound. It was a very strong group sound. And I think that's a long-term goal for Kokoroko. To continue to write music and continue to grow."

Kokoroko's 23-date tour begins in Cardiff on March 24, followed by dates across the UK and then in the Netherlands, Belgium, France, and Turkey.