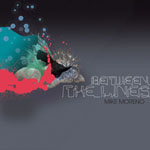 Mike Moreno's stylized and progressive playing has made him the guitarist of choice for many rising musicians' recordings including trumpeter Jeremy Pelt's Identity (MaxJazz, 2005), saxophonist John Ellis' By A Thread (Hyena, 2006) and drummer Kendrick Scott's The Source (World Culture Music, 2007). Now he's at the helm with the impressive debut Between the Lines.

Enlisting help from a solid crew of young musicians including saxophonist Marcus Strickland and drummer Kendrick Scott; Moreno's eight compositions show a maturity and depth beyond his youthful appearance. The group interaction, with superlative written material, is interpreted into thoughtful and detailed pieces that show Moreno's developing style. Examples include the spiraling path of "World Of The Marionettes," where his electric guitar is liquid, smooth, inquisitive and free.

Creative liberties are also exercised on the mid-western aura of "Forward And Back," which begins with a faint AM radio sound quality intro from the guitar and piano, and then turns into an intricate and well-composed work of modern music.

Moreno's acoustic playing is a pleasant surprise on "Gondola" and "Road Song," which also includes some fine soloing by pianist Aaron Parks. This is by no mean just a guitar recording but a well-conceived ensemble project, as witnessed on the piano/guitar duo "Still Here" and "Uncertainty," with its intense-to-calm changes featuring a distinct tenor sax solo from John Ellis and tingling drum work by Tyshawn Sorey.

It would be easy to compare Moreno to longtime influential guitarists like Pat Metheny, but this is music showing the growth of a young musician who has his own ideas and the means to fulfill them. Between the Lines stands on its own as a bonafide work of enjoyable music from an up-and-coming guitarist who is well worth checking out.

World Of The Marionettes; Old Wise Tale; Forward And Back; Gondola; Road Song; Between The Lines; Still Here; Uncertainty.