Dave Stapleton Quintet: Between The Lines 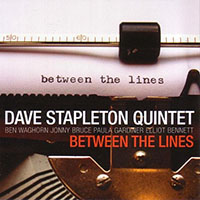 Leading a band while simultaneously recording other musicians for your own label is no easy feat, but it's one pianist Dave Stapleton is achieving with style. Between The Lines is the third disc by the feisty and engaging Dave Stapleton Quintet for Edition Records, whose catalogue includes well received albums by Polar Bear saxophonist Mark Lockheart, pianists Ivo Neame, Matthew Bourne, Keith Tippett and Tom Cawley, and Troyka, and is growing fast.

Stapleton, who graduated from the Royal Welsh College of Music and Drama in 2002 in classical piano, has cited influences ranging from pianists Keith Jarrett's European Quartet and Herbie Hancock's Mwandishi, to arranger Gil Evans and composers Ravel, Satie, Mahler and Beethoven. Between The Lines, on which Stapleton frequently plays the Fender Rhodes, draws most explicitly from Hancock's funked-up, early 1970s, electric experiments and Evans' elegant orchestrating style. The album—which follows DSQ's When Life Was In Black And White (Edition, 2005) and The House Always Wins (Edition, 2007)—combines the agility of a small band with inventive through-arrangements that at times suggest a much larger ensemble.

Stapleton's writing is marked by strong melodies and magnetic hooks, powerful riffs and ostinatos, and unusual frontline voicings. His pieces are given suite-like structures, or alternate between reflective and fiery sections, rarely staying in the same place for long. Solos are compact and framed by detailed charts. The band—which has seen only one change in personnel since it began recording (saxophonist Ben Waghorn joined for the second album)—exists primarily to perform Stapleton's work, and does so with both gusto and finesse.

Waghorn is heard on several saxophones, and also bass clarinet, whose combination with Stapleton's Fender Rhodes and Paula Gardiner's throbbing bass, gives the 10:54 "Horn" an attractive Mwandishi vibe. The tune, a mini-suite of five sections, showcases trumpeter Jonny Bruce, growling and pugnacious in the first and third sections, muted and breathy in the second and fourth. Waghorn steps forward on tenor for the bouncy concluding section. It's a great track. So too are the more temperate "Socks First" and "Under The Cherry Tree," on both of which Bruce projects a beautifully rounded, open tone. There's a Maghrebi feel to the arrangement for "Socks" which inevitably evokes trumpeter Miles Davis' Gil Evans-arranged Sketches Of Spain (Columbia, 1960).

Other highlights include the headlong, boppish "Wig Wag," and "Dry White" and "Between The Lines," two slow burning, building ballads whose arrangements evoke a lushness hard to achieve with just five instruments. Gardiner is especially delightful on "Dry White," which Stapleton wrote with her in mind.

Carefully arranged, well-crafted albums such as this often fall short on fire and heat, but Between The Lines has plenty of both, and Stapleton's arrangements play to the individual strengths of his colleagues. Highly recommended.