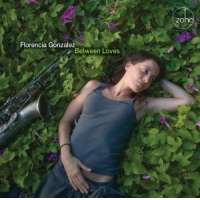 Uruguay-born, New York-based tenor saxophonist Florencia Gonzalez wrote the material that appears on this album during her first years in the United States. That time period found her focusing on narrowing geographical and artistic divides, creating music that exists between worlds.

Gonzalez's debut album—Woman Dreaming Of Escape (Self Produced, 2012)—found her working out her compositional personality with a big band. Here, she goes with a three-horns-plus-rhythm sextet, but the band often sounds bigger. A good case in point is the album-opening "Hurry," which features dovetailing horn voicings that fatten up the sound. That number—Gonzalez's arrangement of a popular song written by Hugo Fattoruso—is the only non-original on the album. From there, the music goes every which way. First, Gonzalez delivers a self-described "abstract tango," complete with close horn voicings, a sinister piano line, and a whole lot more ("Woman Dreaming of Escape"). Then she shines a light on the two other horn players in her band—trombonist Shannon Barnett and trumpeter Jonathan Powell. "Zamba For Jose Gervasio" gives Barnett a chance to work in a relatively calm environment, sharing some of the attention with bassist Fernando Huergo, and "Weird Pericon" finds Powell working his magic against a line from pianist Luis Perdomo.

As the program continues, Gonzalez and company deliver a tribute to saxophone icon John Coltrane ("The One Who Never Was") and explore a minimized arrangement of one of the leader's big band compositions ("Chacarera For Greg"); the former is a charged ride and the latter proves to be one of the standout tracks on the album. Things then come to an end with the title track. It's a tale of chord pairs that serves as a perfect musical manifestation of the concept surrounding this album.

Gonzalez's tenor playing has a graceful and direct appeal to it, but it's her writing that makes a bigger impact throughout Between Loves. She creates situations where independent thoughts manage to coalesce or come apart, creating new ideas and opportunities for the musicians at play.

Hurry; Woman Dreaming Of Escape; Zamba For Jose Gervasio; Weird Pericon; The One Who Never Was; Chacarera For Greg; Between Loves.