By Doug Collette
April 6, 2005
Sign in to view read count 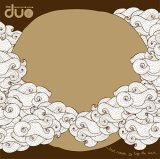 "Becky" and "Vortex will sound eminently familiar to fans of the Duo and anyone who's attended one of their shows over the past few months, though markedly well-recorded in both depth and clarity through the auspices of producer Joey Waronker, who's worked with both Beck and REM in recent years. Benevento and Russo come across as alchemists of a sort on this album, yet these elemental tracks, fatback beat pumping under fusillades of electric keyboards, aren't the most inventive on the album, only the most accessible. Even when Russo injects the clickety-clack of electronic percussion on a track like "Welcome Red, as a means of matching Benevento's seemingly perpetual discovery of what sounds he's able to extract from his devices, there's the palpable rush that comes from the best jazz-rock fusion, except that the sound is so riff-oriented raw and abandoned here, it almost qualifies as hard rock.

Such is not the case as the Duo metamorphoses into more sophisticated interpreters of jazz traditions by way of the tough, insistent piano progression that is "9x9 as Russo lightly draws intricate rhythm patterns beneath Benevento's acoustic ivories, you begin to think of the influence of Monk—then all of a sudden, the pair switches gears, plugs in and demonstrates how Thelonious' approach sounds in the new millennium. Benevento and Russo remain firmly ensconced in the wondrous realms of jazz on "The Three Question Marks," where the liquid guitar figures of Smokey Hormel conjure up the proverbial smoke-filled after-hours atmosphere.

Less likely to be categorized are the final cuts on Best Reason to Buy the Sun. The soft tranquility of "My Pet Goat is diametrically opposed to its title, as it's a patient rumination on the melodic motif of "Twinkle Twinkle Little Star. Brushes on drums, soft piano notes and Hammond organ lines also appear in this CD's "hidden" track, another deceptively titled tune called "Mephisto that echoes the tones the Duo will often use to close live shows. The contrast with what's preceded this gentle number is all the more sharp if you let the disc begin again, with the slamming sounds at the start. As with Benevento and Russo's best concerts, you realize you've covered a lot of ground in a very short period of time.

Which is a good way to describe the career path of the Duo at this point. These two young turks have the potential to add all manner of collaborators besides contemporary mavericks like saxman Skerik and percussionist Mike Dillon (not to mention former Phish bassist Mike Gordon) to their two-fisted attack, thereby making the sky the limit. Is that why the name of the album is so fitting?

Visit the Benevento/Russo Duo on the web.