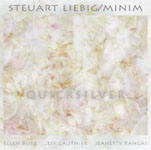 Finding a meeting place between contemporary chamber composition and improvisation can be a challenge. All too often artists who spend their time in the more rigid confines of the classical world fail as improvisers, because they work most commonly with formal structure, where expression is defined in terms of subtle nuances in dynamics and phrasing. Pure improvisers, on the other hand, are sometimes too liberal, unable to work comfortably within a more rigorous form.

Still, there are an increasing number of artists managing to bridge the gap—and they're coming from both ends of the spectrum. The Kronos Quartet, on its latest disc, Mugam Sayagi, moved towards the centre on pieces that are formal in nature but demand the string quartet to be more overtly improvisational. And groups like Clogs, with a mix of players from both sides of the fence, create a music that blends the best of both worlds.

Contrabassist Steuart Liebig is an artist who has spent considerable time in both universes. Playing rhythm guitar at an early age for Les McCann, Liebig also pursued classical studies on contrabass. Since his first release under his own name in '93, with his trumpet/violin/bass/drums Quartetto Stig, Liebig has chosen to work within the broader scope of improvised music—a cousin of free jazz that, while equally extemporaneous in nature, is more rooted in contemporary classical music than traditional jazz concepts, and can also include more formal through-composition.

With his latest quartet, Minim, Liebig's Quicksilver leans more towards the structured side; still, improvisation is an integral part. The first piece, the 52-minute, 23-part "Mosaic, is based on the concept of the haiku; but rather than centre itself on any particular poems, it used the haiku's structure as a foundation—pieces with 17 measures, or a 17-note theme, for example. Liebig and his rather unusual group—violinist Jeff Gauthier, flautist Ellen Burr, and percussionist/vibraphonist Jeanette Kangas—wind their way through a series of miniatures, ranging from a little over a minute to just shy of four. Breaking up the quartet for solo pieces and various duo and trio combinations, as well as nine pieces for the whole ensemble, Liebig creates a surprising variety of textures with such a small ensemble. Some pieces are strongly rhythmical in nature—like the second part, which revolves a pulsing 5/4 figure—others more subtly so, like the seventh part, where there is form, but time is more elastic.

On "Mosaic, as on the two longer pieces that conclude the disc—"Chrysanthemum and "A Single Rosehip Bursts in Praise —the general ambience is one of dark elegance. The harmonic foundation may be oblique, but there are no sharp edges, and a certain delicacy pervades. The quartet utilizes space as an equal fifth member, and a gentle delivery that makes for a strangely compelling experience.

For a look at how modern improvisation can be seamlessly married to more stringent construction, Quicksilver is an album that adventurously blurs the boundaries, demonstrating that two apparently contrasting views can comfortably coexist.