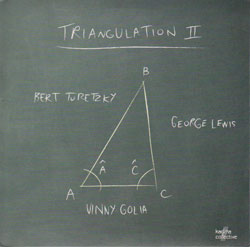 The trio at work here consists of three giants of improvised music. On trombone, George Lewis has few peers; multi-instrumentalist Vinny Golia has been a rock of the Los Angeles free-jazz scene for over 30 years; and contrabassist Bert Turetzky has a lifetime of cutting edge experience to contribute. The music on Triangulation II is more than just a record of three virtuoso musicians at the height of their powers, it's a testament to the power of listening.

There is a telepathy going on throughout this session that Turetzky described as "magic." Listening to this disc, it's hard to disagree. All eight of the pieces were improvised on the spot, yet there is a heavy compositional aesthetic going on. There is a history between Golia, Turetzky and Lewis that has been years in the making. All three improvisers extend the language and range of their individual instruments (or in Golia's case, his arsenal of instruments). Consequently, it is often difficult to figure out who is playing what at any given time. That's also at least half of the fun— trying to make those distinctions.

Things begin with the ominous "Reconnaissance." Golia's haunting air pulsations and pad popping on his bass flute set up Turetzky's low-toned arco work. Suddenly Lewis enters with terse staccato repetitions and it's off to the races. The intensity builds with Turetzky sawing at his strings below the bridge, then tapping his bass all over. Then the dynamics shift, and there is a gradual calming of the storm. Somehow they all dial down to a whisper and finish off as if it were all written down. The next piece, "Plenipotentiary Panache," starts with the bass bowing eerie harmonics while Golia alternates between repeated trills and long, intricate lines via circular breathing. Lewis enters, matching Golia's intensity and they trade, short broken phrases that ricochet back and forth. The trio downshifts to almost pointillist exchanges of long, drawn tones. Turetzky interrupts the stasis with a raspy swooshing sound.

Lewis suggested they play a ballad, all starting together: that was the extent of preparation for the remarkable "Ballade." The musicians start harmonizing with each other instantly. Turetzky bows an independent line that supports the thoughts that Golia and Lewis finish for each other. Golia doesn't play tenor saxophone often and that's a shame, because his sound on this is beautiful. After everyone drops out momentarily to showcase the pliant tenor, Lewis returns with some nagging plunger- mute commentary, then soft multi-phonics. Trombone and tenor echo each other's lines, while Turetzky bows dark insinuations that snake around the two horns. Somehow, the three follow each other down to a perfect melodic ending.

"You Don't Say" is a duet between Golia (on one of his ethnic flutes) and Turetzky's contrabass. The flute starts flutter-tonguing while the bassist rubs his bow all over the instrument. There is a percussive interplay where each musician takes on the role of "drummer." There is some brief, deep toned pizzicato work, then back to furious arco over Golia's long, operatic lines. "A Low Frequency Colloquy" offers the chance for Golia and Lewis to dialogue. The reedman sends out high pitched overtones on the contrabass clarinet, maximizing the reverberant effect of his large instrument while Lewis' trombone pushes and pulls with percolating plunger-mute discourse. Out of nowhere, Golia switches to contrabass saxophone and the two pair off for a serious low-frequency sparring session. The sub-tone antics are then broken up by hilarious squealing and screaming sounds that are way out of each instruments range. Instantaneously, the dynamics draw down, and Golia introduces a descending melody that closes out the piece.

It's back to the trio for "Diversion a Tre." Turetzky drags his bow across the strings for mysterious scratching, scraping effects, while Lewis begins a series of manic, comical special-effects sounds using the trombone mouthpiece by itself. Golia's keening clarinet work completes the trio's independent conversation. Lewis and Turetzky duet live over some pre-recorded Golia tracks for "Another Heated Conversation." This is another piece that seems highly composed. Trombone and bass start and stop on a dime—as if they can read each other's minds. Turetzky places a piece of paper in between the strings of his instrument to achieve some distorted, wicked bag-pipe effects, and Lewis responds to the recorded tracks with a strong, willful voice.

It all comes to a close with "Up Is Down (Jan Sedifka R.I.P.)" Golia's breathy bamboo flute sets the stage, and Turetzky responds by vocalizing strange humming sounds. Lewis gets an odd, percussive sound by blasting pure air though his trombone. Everyone makes use of, and manipulates overtones for ghostly effects. The bassist begins bowing somber, funereal lines, then abruptly starts striking the instrument. Meanwhile, Golia switches to piccolo, layering piercing melodic fragments while Lewis comments very softly underneath.

Triangulation II is a sublime, powerful document. Turetzky uses his bass to paint pictures and tell stories; Lewis delivers a state-of-the-art compendium of trombone potential; Golia's total mastery of the entire woodwind family is stunning. In the end, it's three master musicians communicating at the highest level. Anyone interested in free improvisation and the cutting edge of creative music should give this a listen.

Tracks: Reconaissance; Plenipotentiary Panache; Ballade; You Don't Say; A Low Frequency Colloquy; Diversion a Tre; Another Heated Conversation (Thanks to M.W.); Up Is Down (Jan Sedifka R.I.P).

Reconaissance; Plenipotentiary Panache; Ballade; You Don't Say; A Low Frequency Colloquy; Diversion a Tre; Another Heated Conversation (Thanks to M.W.); Up Is Down (Jan Sedifka R.I.P).