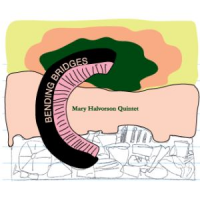 The widely celebrated 2010 debut of Mary Halvorson's Quintet, Saturn Sings (Firehouse 12), confirmed the young guitarist's growing reputation with a selection of urbane compositions as impressive as her idiosyncratic improvisations. Bending Bridges expands upon the previous album's concepts, offering further proof of Halvorson's burgeoning talent, reinforced by an even greater sense of accord within the ensemble.

Bassist John Hébert and drummer Ches Smith once again support the vivacious frontline of trumpeter Jonathan Finlayson and saxophonist Jon Irabagon, who join Halvorson's Trio for half the record, extrapolating a dizzying array of contrapuntal themes while gracefully navigating the capricious transitions of her modular structures. Halvorson's salient abilities as a composer are a defining feature of the session; her talent for crafting intricate arrangements that maintain a sense of organic cohesiveness—despite often jarring juxtapositions—is noteworthy.

Halvorson's labyrinthine pieces evolve with exacting precision; their fleetingly oblique melodies and sudden shifts in color, density and rhythm are mediated with sophisticated deportment. For example, the opener, "Sinks When She Rounds The Bend" implies the literal aspects of its title; after a stately fanfare and pair of understated solos from Halvorson and Hébert, the band gradually builds momentum until a frenetic collective climax coaxes the guitarist into a brash, Sonic Youth-inspired maelstrom, before the entire ensemble suddenly plummets into muted pointillism, sinking into aural oblivion.

Although Halvorson's multifaceted writing is a highpoint of the date, it ultimately serves to inspire her improvisational prowess—and that of her sidemen. Making the most of a delay, distortion and volume pedal, she summons a bewildering array of prismatic tonalities, her spidery fretwork vacillating between effervescent ruminations and bursts of coruscating frenzy—often within the same tune. Yet Halvorson's unique method of bending tones and pitches with a delay unit is her most striking innovation, advancing the notion of blue notes with futuristic élan.

As longstanding associates of Halvorson's, Hébert and Smith negotiate all manner of dynamic tempo shifts, modulating time signatures and deconstructed interplay; their congenial rapport imbues a sense of stylistic continuity to an endless variety of rhythmic strategies, from the thunderous downbeats of "The Periphery Of Scandal" to the nervy syncopation of "Deformed Weight Of Hands." Finlayson and Irabagon conjure equally fascinating variations from these multihued numbers; on the epic "Love In Eight Colors" Finlayson's unaccompanied solo resounds with intervallic ingenuity while Irabagon fashions a series of quixotic lyrical motifs from controlled multiphonics.

Greater than the sum of its parts, Bending Bridges is another exemplary offering from Halvorson's Quintet, whose eclectic yet systematic efforts are as consistently challenging as they are appealing.