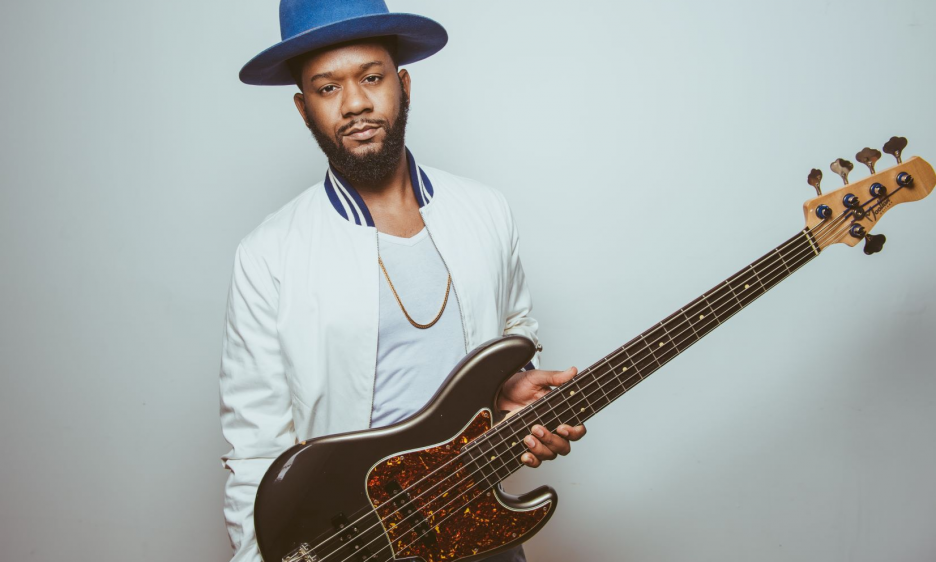 By Wendy Ross
February 5, 2019
Sign in to view read count

It's always a pleasure being back home. It's always good seeing all the beautiful old faces and new faces. It's a celebration! It's my birthday! You get one day a year to do whatever you want, and this is what I love: being right here playing music for my people.
&#151Ben Williams

Hamilton Live is a trendy performance venue located below The Hamilton restaurant in Washington, DC, mere blocks from the White House. It was the holiday season between Christmas and the New Year, an appropriately festive time for a birthday party. The man of the hour, bassist Ben Williams, was throwing his annual birthday bash and it was so intimate that, despite the audience of several hundred, it felt as if you had received a personal invitation.

Williams's 2009 win for bass in Thelonious Monk International Jazz Competition, led to many opportunities, including the release of his first CD, State Of Art (Concord, 2011). He is known for his virtuosity and range, and his time recording and touring with Pat Metheny honed and inspired his work ethic and artistic vision as a composer. The spotlight and growth from those experiences influenced his readiness to release his second album as a leader, Coming of Age (Concord, 2015)

As well as being a gifted bassist and guitarist, Williams seems to be that shining star around which people orbit. Everyone knows that cool kid in high school, the one everyone wanted to be, date, or just hang around. Whether they were the star athlete, the comic, or the coolest nerd ever, they knew how to engage people and ended up with an eclectic group of friends. The exceptionalism is magnified in the case of Williams since his attendance at The Duke Ellington School of the Arts. His friends were not only the coolest kids but also the "mad talented" ones, and he had many of them onstage that night.

It was like a funky variety show of prodigious up and comers. Williams credits growing up in the vibrant musical scene of DC for the multi-textured sounds of his music. Though infused with the old masters, as a leader Williams picked fellow genre-bending musicians like GRAMMY-winning trumpeter Maurice Brown to incorporate the fresher sounds of hip-hop, rock, and go-go that influenced his generation.

As the band played a funky intro riff, Williams was introduced by his self-proclaimed best friend Maud Arnold, a tap dancer in a vertically striped, rainbow glitter jumpsuit. In one long, earnest breath, she enumerated his generosity, his hometown roots, and added his Duke Ellington School and Julliard School pedigrees like dollops of increasingly sweet ice cream. The 2013 GRAMMY award for Williams's album with the Pat Metheny Unity Band was the whipped cream on top.

With Arnold's words "Live, here for you tonight, the one and only Mr. Ben Williams" and amidst applause, Williams walked out on stage in a suit the color of a red orange crayon in a Crayola box. The hue popped but became remarkable once Williams pulled the bass into his arms and you realized it matched the blush on the burnished wood of the instrument, and Williams's dotted shirt echoed the dark wood of the fingerboard. Without words, he communicated that he was "all about that bass," that it was part of him as a tool, an instrument, a means to an end, but not the end itself. The goal was to make you think, and make you feel.

"What's up DC?" Williams began, repeating the question until he got the needed decibel range and enthusiasm. "It's always a pleasure being back home. It's a celebration! It's my birthday! You get one day a year to do whatever you want, and this is what I love: being right here playing music for my people." This was the concert's second year at Hamilton Live. It began seven years ago at DC's Bohemian Caverns and was held there until the historic venue closed in 2016.

In the holiday spirit, Williams sang "Merry Christmas Baby" as the band gave a jamming take that intensified as the seconds pulsed by. The blues phrasing, horn riffs, and rhythmic keyboards gave it an old-school feel. "Mo Better," Williams asked trumpeter Maurice "Mo Better" Brown, "What you got to say?" Brown replied with a grooving solo.

"Some people up here are funky with their hands. This young lady is funky with her feet. Maud Arnold on taps!" Williams announced as Arnold went into a complex tap rhythm. "We got the Bishop, Mr. Allyn Johnson in the house," he said to the keyboardist. "What you got to say, Bishop?" The keyboardist had his moment, and when the trumpet came back in, Williams interrupted, "It's' my birthday. You don't mind if I get a slice of this cake?" He played the bass, its deep vibe resonating in a compelling riff syncopating the groove.

"If You Hear Me" began with beautiful keyboard runs as a marching beat preceded the melancholy vocals. It was reminiscent of Jesus's last call to The Father on the cross, "Why didn't you save me? Has this world forsaken me? Do you hear me when I pray?" It had the retro-soul feeling of Marvin Gaye's social justice songs, with an extended, beautiful, deep-pitched bass solo. "Hood Robbin" was inspired by a walk on Venice Beach where Williams saw a sign that said Donald Trump was the opposite of Robin Hood. It began with a funky beat followed by the rest of the instruments joining in. It sounded sketchy, as if someone was up to no good.

Next, Williams brought out Maimouna Youssef, also known as Mu Mu Fresh, a GRAMMY-nominated, singer, rapper, emcee, and spoken word artist. Her GRAMMY nomination came from her vocals on The Roots album Don't Feel Right (Def Jam Recordings, 2006). Williams introduced her with a story about how they met in tenth grade homeroom at the Duke Ellington School. "I felt this energy behind me," began Williams. "Some people just have a certain presence. She was deep into something, rapping to herself. Even at 15, I knew she was going to be a future legend in the making."

A young woman came out on stage, the red in her curly, two-toned updo glowing like a blood crown. She definitely had a presence and—dare it be said—attitude. "I was probably working on my album, that's what I was doing," she said with a laugh, casually continuing Ben Williams's story as she approached the microphone. "It's like a prayer in the Lakota language," Youssef explained of her first song, "Ink Pata." "My mother taught me this song when I was little. It's about the American-Indian War. When the men went off to fight, the women would stand on the edge of the mountain waving their shawls so their husbands would know where to come back. If the husbands never returned, they waved their shawls until they became one with the wind. It's now sung as a lullaby...how war becomes child's play. I was raised with both my cultures, African-American and Lakota, and it left quite an impression."

Youssef began with a keening moan that transformed into a chant, her voice rising and falling in an echoing wail until she began a rap about her ancestry. "From the daughter of a gypsy and a kingpin," she stated, before juxtaposing the image of her grandmother's healing arts with life on the Baltimore streets. "We are spiritual beings having a human experience and nothing else is ever true." She ended the song with a moaning run, at once chilling and healing. The rest of the songs Youssef performed that night can be found on her album Vintage Babies (Self Released, 2017), which also featured the artist Common.

"We are here to celebrate the life of my fellow classmate, Ben. Hard to believe it's our first time playing together," Youssef commented before launching into "Miracles." It began with a scatting chant, then the lyrics: "I am ready to be vulnerable... Your miracle is waiting for you. It can't come till you're ready. What are you going to do? Are you ready to take a chance on life?" It's a song about self-respect and taking chances, beautifully sung. She can be extremely vulnerable in ballads, then tough and badass in her emcee persona.

Williams next performed a stripped down version of "Come Together" accompanied by Arnold's tapping, a percussion instrument interacting with the beat. It managed to sound retro with the tap but freshly forward in the choice of a rock song. Williams then gave a tribute to Roy Hargrove. "I think I can speak for everyone on this stage to say we were inspired by this master, gone too soon." They played "Poetry" from Hargrove's album with his band The RH Factor, Hard Groove (Verve, 2003). Williams played a melancholy bass, joined by another friend, Javier Starks, performing spoken word, and finally a call and response. "Who do we do it for?" The audience replied "We do it for Roy." "That's the power of Roy Hargrove. That's what up!"

Youssef then returned to the stage to perform "Don't Bring Me Down," with its words "Being a woman is like being black twice." The song speaks of the burden of expectations that society, and men, demand of women. It could be a feminist anthem. The music also had strong syncopation. Youssef scatted to the horns and made a kissing sound into the microphone to the delight of a few male audience members nearby. Williams then thanked his band members: Allyn Johnson = 20383 on keyboards—congratulating Johnson on winning a DC Mayor's Arts Award—Justin Faulkner on drums, David Rosenthal on guitar, fellow Duke Ellington alumnus Brevan Hampden on percussion, Chelsea Baratz on saxophone, Maurice Brown "Mo' Better" Brown on trumpet, and Javier Starks.

Youssef finished the show with "Work in Progress," a song about not always being perfect but working on life's challenges. "Lean not into your own understanding, it will lead you astray, but trust in the lord it will be okay," she scatted, challenging the audience to join in. Ben Williams said a final thanks to his mother, relatives, friends, and the audience. He said his next project is called I Am a Man and it explores the ideas of manhood, specifically Black manhood. The title references one of Martin Luther King Jr.'s last missions before his assassination, the 1968 Memphis sanitation workers' strike. "I hope to see you again next year. Bring two more friends and they Mamma." He concluded the evening on a hometown note.

Wendy Ross, a University of Maryland Journalism graduate, started writing for jazz newsletters in the mid-eighties. She has worked in public media for over twenty years.