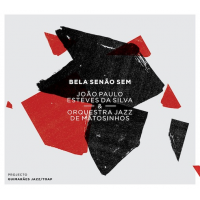 João Paulo Esteves Da Silva's compositions, while owing much to the folk and classical traditions of his native Portugal and something to Gil Evans' writing in the 1950s, on occasion display quite breathtaking originality.

If modern, post-Salazar Portugal has a musical identity it is surely contained in these wordless, questing songs emerging from Matosinhos, a city hitherto renowned artistically only as the birthplace of architect Álvaro Joaquim de Melo Siza Vieira and poet Florbela Espanca.

Bela Senão Sem translates as "Otherwise Without Beauty," a Zen-like title which aptly encapsulates the austere grace of Da Silva's work. This album features seven of his pieces plus his arrangement of a traditional Sephardic song "Moché Salyó De Misraim," a reference to the Inquisition's expulsion of Jews from the Iberian peninsula in the 15th century.

They are interpreted by the Jazz Orchestra of Matosinhos in which Da Silva plays piano and, on occasion, that most unfortunate of instruments, the piano accordion.

Apart from a few dated "free" jazz passages, there's much to listen to here. He wrote the opener, "Certeza" some 20 years ago. It means "Certitude." He says: "I'm not sure why I chose that title. It just sounded right at the time."

Da Silva starts off playing solo. Then in comes the orchestra, playing soaring, sweeping layers of sound. A solo saxophone brings the song to a conclusion, evoking the splashing of waves on one of Matosinhos's wide, sandy beaches after a summer storm.

"Fado Chao" is based on a repeated bass line set against light-as-air stabs by the brass. Fado here refers to the general melancholic mood of the piece, not the Portuguese musical form.

Da Silva's piano plays a central though never over-bearing role on the other numbers. "A Candeia (The Lamp)" and "Pode Ser Uma Serra (It Can Be A Mountain)" are perhaps the most interesting of these, the latter starting life in the foothills as a folksy figure before its evolving into something more complex and interesting at higher altitudes.

All but those deeply into dissonance and atonality should be wary of the closer, "Tristo," on which Da Silva parades his avant garde credentials. The title is a deliberate mis-spelling of triste, meaning sad. This is very apt. The song's inclusion is just that; it detracts from an otherwise fulfilling musical experience.