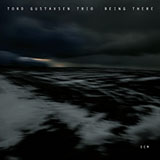 The full measure of the achievement of pianist Tord Gustavsen's Being There can really only be gained by going back to his two earlier ECM releases, Changing Places (2003) and The Ground (2005).

The phenomenal reaction to the first album was surprising and begs an explanation. The simplest would be that Gustavsen's music can sit quietly in the background, offending no one and providing soothing relief for this tempestuous world.

While that would not be wrong, it does not explain the reaction of much of the press and the thousands of people who have come out to hear the trio live. The sensitive listener who looks for the markings of consciously directed creation, which is one of the trademarks of art, will find much fertile ground to examine and appreciate.

The second CD both reiterated and expanded the purposefulness of the choices that Gustavsen made as a composer and player, quashing any thoughts that his initial release was a freak. As the third member of the triptych, Being There closes the circle and provides a solid platform for the future.

The first thing that must be understood is that the trio, which includes bassist Harald Johnsen and drummer Jarle Vespestad, is a working band and the material on the record has been played in concert. Indeed, the tunes on the three CDs can be considered a repertoire that references centeredness, joy-of-life, breathing and contemplation.

The essence of Gustavsen's art is the combination of mystical romanticism and intellectual steeliness that creates tension by playing on the edges of musical styles, harmony and form. It is then wrapped in a cool calmness that almost hides it.

Tension is also created by the fact that Gustavsen comes close, sometimes very close, to openly committing to a style or progression, but then shifts away by playing a minor chord, obscuring a harmony that was once clear, or loosening the pulse by expanding or contracting a phrase.

Much has been written of the gospel, tango, blues and hymnal references in Gustsavsen's music. Yet, these references are extremely ephemeral and are but flashes of familiarity in music that hovers above it all.

"Blessed Feet" jumps out among the tracks on Being There precisely because stylistically, it superficially sounds so clearly like something Ramsey Lewis might have played—it is head-turning and funky. The repeat sections move up a whole step to a new key (a common technique), and even has a release!

Listen again. Within the wonderfully light and dancing groove that Vespestad and Johnsen provide, Gustavsen subverts expectations over and over again, predominantly by shifting to minor chords.

Just as Gustavsen can play the same note countless ways, Being There has countless layers, which is what makes it a great CD instead of just a good one.