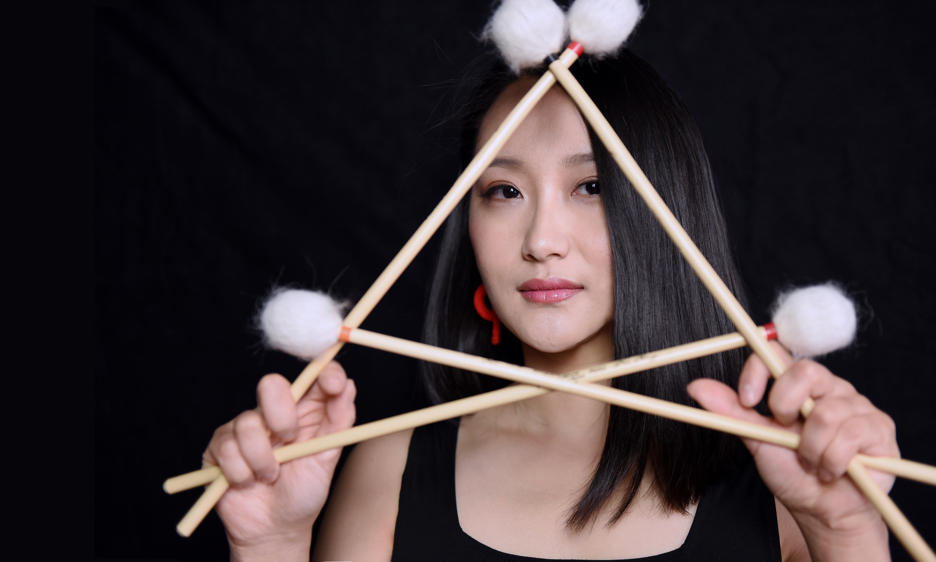 As the capacity audience for this concert filed in, it was notable that they were a varied and cosmopolitan SOAS crowd with a high proportion of children accompanied by adults. Before the concert proper began, the audience gazed at the stage, transfixed by the vast array of percussion instruments on display and, across the front of the stage, an assortment of stringed instruments from across the world, instruments which would later be revealed to be a ruan, a pipa, a shamisen, an oud and a sanxian. On the right hand side of the stage stood an easel with a large dark canvas resting upon it. Although the audience had come to see the London-based Chinese percussion virtuoso Beibei Wang, the items on the stage suggested she would be joined by several guests...

Once Beibei Wang had been introduced, within seconds of coming on stage she was straight into playing—a solo piece entitled 'Rolling Nut,' in a traditional style, on a large drum, using sticks to extract an impressive range of sounds and effects from it. From the start, Wang's stage presence commanded attention as she moved rhythmically and radiated enjoyment of what she was doing. And, setting the standard for the evening, she played from memory with no sheet music in sight. For the second piece, Wang was joined on stage by her first guest, Michael Skelton; the two played a duo entitled "Bull fights Tiger," each playing a large drum. and occasionally striking an aggressive pose towards the other, in keeping with the piece's title. Their professionalism was demonstrated early in the piece when Skelton inadvertently dropped one of his drumsticks off the stage; Wang passed hers to him while she got herself another set, all without any drama or obvious effect on the music they were playing. Slick and cool-headed. (This can all be seen in the footage of the concert on YouTube, below.)

After Skelton had played a solo piece on the three-stringed sanxian, one which demonstrated that instrument's unique sound, he left and was replaced on stage by Wang's second guest, multi-instrumentalist Charlie Cawood. Wang and Cawood played a couple of duos; the first, with Cawood on pipa and Wang on a range of percussion including gongs, was entitled "Battle" and featured an improvised section by Cawood; the second, with Cawood on oud and Wang playing a ceramic pot, was entitled "Imminent Journey" and is from the soundtrack of the Turkish film Jara. Yes, this performance was full of variety, driven by the range of talents of Wang and her guests. For the next piece, accompanied by percussion from Wang, Cawood played Japanese shamisen and Skelton returned to play sanxian, the connection between the two stringed instruments being very clear to see and hear.

Following a performance of the composition "Marimba Spiritual," written by master Japanese composer Minoru Miki, on which Wang displayed her talents on the instrument of the title, ably accompanied on percussion by Skelton, he left the stage. Another guest, London-based Dutch artist Gwendolyn Kassenaar, arrived, making a dramatic entrance through the auditorium, playing a gong. For the next ten minutes Wang and Kassenaar played a music-plus-painting duet, reacting to each other in real time, Kassenaar's marks being responses to Wang's music and vice versa. The end results were stunning and received prolonged applause, with Wang herself applauding the artist.

The concert concluded with an atmospheric piece played by Wang, Skelton and Cawood joined by the final guest, Italian producer, Francesco Cucchi, who contributed recorded sounds from his laptop which added to the piece's soundscape which at times resembled that of a rainforest.

Understandably, once that final piece ended, all those concerned were applauded at length. They all returned to the stage afterwards for a question-and-answer session with the audience. It was very noticeable that, despite it being past some of those children's bedtimes, no-one left until the very end. A fabulous evening by and for all concerned.