BY JAMES FLEMING
September 24, 2018
Sign in to view read count 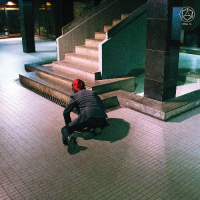 Lurking somewhere between Sun Ra's Arkestra and the Chemical Brothers is Beheaded Totem's jarring, rocky soundscape. Every turn seems to loop back on itself in a never-ending cycle of music. The wide expanses of the synth and percussion combo create a sense of openness and space. Of a plain of sound where the horizons stretch out in both directions. And the brass, more concentrated and precise, mirror the sunbeams that blister the ground. Their spare riffs colour the sound with flaming hues of orange and yellow.

The hi-hat groove of "Wilderness Of Glass" puts teeth in its jaws. Broken glass fangs that sharpen the edges. While the hand-drums' circular rhythm is an earthy contrast to that bite. A grounded, tribal beat. That keeps the dirt between the track's toes. Even as the trumpets echo and the synths whirl like the milky way.

As the industrial-strength beat of closing-track "Swisid Mekasine Rejiman" evokes images of deep mine shafts, the electronics float ghostly atop the rhythm. And the processed trumpet cuts the thicket of sound like a comet through the cosmos. The comic-prophet Bill Hicks said that space "both inner and outer" was humanity's to explore. On records such as this the first reconnaissance teams move into those territories. To map out their mysteries.

The Kubrick-esque synths of "A Scar In The Skull" are percussion-less. Nebulous and spaced-out. Reminiscent of Wendy Carlos' soundtrack for A Clockwork Orange. But on "A Scar In The Bone" the synthesisers are stormy. Like a flood of radio static. Towards its end their pulsations intensify until they suddenly give way to the aforementioned "Swisid Mekasine Rejiman." A shocking, off-kilter shift. That curves one last bullet before the record moves towards its close.

Between the album's bookends, "Danbala Propaganda" moves to a fractured rhythm. A single synth-note pulses in the background. That lures in the unwary with its hypnotic, mechanical exactness. Before the higher electronics rise out of the percussion's waters. Dragging the tension up as they ascend to the stratosphere.

Rhythm is the central idea here. It's the common thread running through the tapestry. In lieu of melodic themes, HHY & The Macumbas have used rhythmic motifs. And those possibilities are explored to their fullest potential on "Ergot Glitter." It moves like Frankenstein's monster on a skewed 3/4 beat. Powerful, slow, menacing. With reaching hands and a synth-growl at the back of its throat.

This is a unique record. Where technology meets tradition. It moves constantly in a hypnotic loop. But just as the sandman is descending it fires one of those curved bullets. Bullets that never miss their mark. HHY & The Macumbas have dared to meld disparate influences in an increasingly divided planet. As the free world's leaders try to isolate it from its brother-lands, HHY & The Macumbas seek to unite all cultures. So that those spaces, "both inner and outer," can be explored as one, universal race.