Maximize your visibility at All About Jazz by upgrading your musician page from standard to premium. With it, you'll receive All About Jazz home page exposure, a highly stylized / ad-free musician page with bonus features and benefits, an ad, plus you control where you sell your music and so much more.
Learn More
85

BY GLENN ASTARITA
September 24, 2018
Sign in to view read count 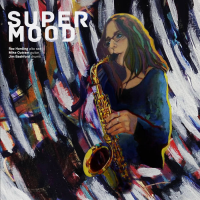 The trio covers several acres of musical terrain on this inspiring debut led by British saxophonist/educator, Roz Harding (Mike Westbrook's Uncommon Orchestra, Paul Dunmall). Indeed, it's one of those unanticipated surprises that at the very least, adds a nouveau light to the possibilities of what a hip, small ensemble rendezvous can generate.

Harding and guitarist Mike Outram are near flawless foils and masters of invention. With the latter's recoiling lines, effects and gritty jazz rock soloing and Harding's penchant for melody, the trio sheds no tears performing without a bassist. Here, Jim Bashford's pronounced bass drum hits often compensate in this light.

Cordial themes, dainty hooks and intricate unison runs combined with catchy sub-motifs pleasantly counterbalance the outside jazz maneuvers. Moreover, each piece flows like an act in a comprehensive theatrical production. This is partly due to the trio's signature style and mini-plots.

When necessary the band tightens up, yet also executes ethereal sound-shaping instances amid semi-free detours, heightened by the leader's popping and soaring lines and wavering extended notes. Meanwhile, Outram comps, emphasizes the pulse and uses distortion to amplify or create a series of edgy movements, framed on largely, medium-tempo rock beats and distortion-fed outbreaks.

"Waiting for Pea" is an edgy and climactic soul-stirring ballad, that upsurges and winds back down, yet "Mega Bear" casts an unusual vista meshed with Harding's creaky phrasings and Outram's harmonics sketched within a meditative theme, embedded with traces of anxiety. Nonetheless, they slowly raise the pitch with sizzling accents and a gait that is performed with a likeness to slow-moving footsteps. But the guitarist's grunge-like riffs and the leader's towering high notes add to the excitement.

The trio lowers the temperature on "For the Moon," paced by Bashford's sensitive use of brushes. Although, the band raises a little hell during "Yesterday I Was On Time," which is a piece that starts with calming sax and guitar parts, leading to a bopping funk groove, odd-metered choruses and feisty soloing escapades. Harding and associates practice what they preach as they execute the game plan via a positive or super mood that underscores their winning formula.

Breath Intro; If You Could; Waiting For Pea; Tangled Part 1; Tangled Part 2; Mega Bear; You Breathed In A Storm; For The Moon; Breath Outro; Yesterday I Was On Time; Fifty-Two Fifty.