Maximize your visibility at All About Jazz by upgrading your musician page from standard to premium. With it, you'll receive All About Jazz home page exposure, a highly stylized / ad-free musician page with bonus features and benefits, an ad, plus you control where you sell your music and so much more.
Learn More
148

BY IAN PATTERSON
September 20, 2009
Sign in to view read count 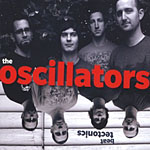 The Oscillators is a four-piece instrumental band from Washington, DC. As quartets go it' slightly unusual as the front line is led by saxophone and electric guitar, something in the vein of Scandinavian group Jazz Kamikaze, though it's difficult to think of many other groups who employ such a tandem. Beat Tectonics, the band's debut, was recorded in a mere two days and, as is often the case with such a speedy approach, the energy level in the playing is high, though not at the expense of the quality of the production, which is polished.

All, bar one, of the eight compositions were composed by drummer, keyboardist and nominal band leader, Charles Ostle. Perhaps more songwriting input from the other members of the band might have resulted in a more challenging listen, because if there is a weakness in the material it's in its slight predictability. Ostle and bassist Glen Oliff never stray too far from maintaining a tight groove, whilst saxophonist Matt Rippetoe and guitarist John Lee trade solos on nearly every track. On the occasions when Oliff slips his tether—during "Theme Song for the Oscillators" or the intros to "Singko" and "Caspian"—the music if lent a touch of lyricism, arriving like a welcome breeze in a slightly stuffy room.

To Ostle and the band's credit, the music sounds in no way derivative, other than being somehow rooted in the early '70s at times, particularly on the rock-inspired beginning of "Entropy," which features a lively solo from Rippetoe. When not following each other's lead, Ritppetoe and Lee play nice unison lines, peeling off in turn to strut their stuff. Lee's distorted sound, as on the oddly titled "Telefunken"—which has little to do with funk—again harks back to the '70s, but in no way detracts from his impressive technique. Fans hungry for the return of extended guitar solos will not be disappointed.

The album's standout track, "Quirks, sounds like the soundtrack to a skin flick; its undeniably sexy, throbbing groove gives way to buoyant, soaring guitar, and a sax which is reminiscent of free-flowing Gato Barbieri from, you guessed it, the '70s. Ostle displays the range of his talents with a fine keyboard solo, before the pulsing groove returns to close this high energy, seductive tune. Again, on "A Good Macrobrew," Ostle turns to his keyboards, producing an altogether spacier sound. Given his obvious pedigree on keys it is something of a mystery that they are not employed more often throughout the album, to break up the guitar/sax monopoly and add a little more depth and variation to the overall band dynamic.

Beat Tectonics is a respectable calling card for a band which probably packs quite a punch live, if the extended soloing here is anything to go by. There is musical talent in abundance, and enough signs to suggest that The Oscillators have something to say, but this outing falls a little short of being essential listening.