Bathed in Lightning: John McLaughlin, the 60s and the Emerald Beyond by Colin Harper 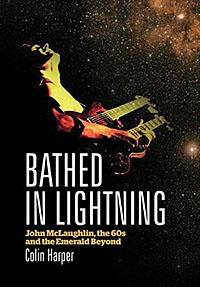 Few guitarists in the history of jazz have leapt onto the scene the way John McLaughlin did when the relatively new British expat made two very different appearances on albums by seminal American artists in 1969: first, with drummer Tony Williams' then-new group, Lifetime on the dense, intense and intentionally supersonically loud Emergency! (Polydor); and then on another groundbreaking but easier on the ears yet equally innovative recording, In a Silent Way (Columbia), the album that changed everything for Miles Davis—a longtime Williams employer, though the drummer had left the trumpeter's group by the time the album was released in July, 1969. On Davis' album, McLaughlin played (as instructed by the trumpeter), "like you don't know how to play guitar," the result being a sparer, cleaner and more spacious approach that may have been somewhat naïve for the guitarist, but was still light years ahead of most guitarists on the planet. On Williams' record, on the other hand, McLaughlin was overdriven into the red, his raucous, unfettered lightning speed phrasing something that seemed to be coming from not just a different planet, but a different universe.

But while McLaughlin's rapid rise to fame—an ascendance that was cemented even further when he formed the legendary Mahavishnu Orchestra in 1971, releasing an album that truly shook the world, The Inner Mounting Flame (Columbia)—seemed to come out of nowhere, the truth (as it usually is), is that McLaughlin did not emerge from a vacuum. Instead, the guitarist spent time in the 1960s as a session player on the increasingly vibrant London scene, rubbing shoulders with everyone from pre-Led Zeppelin Jimmy Page and John Paul Jones to The Rolling Stones touring pianist-to-be Nicky Hopkins and already Stones rhythm section Bill Wyman and Charlie Watts, on records by everyone from Paul Anka and Dionne Warwick to Donovan, Petula Clarke, Herman's Hermits and Engelbert Humperdinck. He also struggled as an aspiring guitarist in the bands of lesser-knowns like singers Herbie Goins and Duffy Powers, as well as making more jazz-centric appearances on albums like pianist Gordon Beck's Experiments with Pops(Major/Minor, 1968) and on Canadian expat trumpeter Kenny Wheeler's impressive leader debut, Windmill Tilter (Fontana, 1969).

All of this and more is covered in Colin Harper's superb Bathed in Lightning: John McLaughlin, the 60s and the Emerald Beyond, a lengthy but meticulously researched book that accomplishes a number of objectives. First, Harper documents McLaughlin's humblest of humble beginnings as a guitarist who, from a very early stage, was already demonstrating the massive talent that would ultimately lead to his becoming known as not just one of the most accomplished guitarists in England, but in the entire world. Harper also provides detailed insight into the London scene of the '60s, told through the prism of McLaughlin's career to be sure, but not by any means focusing exclusively on it.

The author doesn't reinvent the wheel, citing reference material from Walter Kolosky's Power, Passion and Beauty: The Story of the Legendary Mahavishnu Orchestra (Abstract Logix, 2006) where appropriate, but he also reveals plenty of new insights as well, in particular spending significant time exploring more deeply the man who would give McLaughlin his name Mahavishnu: the guru Sri Chinmoy—a man who, Harper ultimately demonstrates, was, indeed, just a man, with the same weaknesses as those he purported to teach to transcend such foibles. Chinmoy was just one step along the path of McLaughlin's search for enlightenment—while a seemingly long time at the time, decades later placed into proper context as just five years out of the guitarist's now-long life. The guitarist was already searching for purpose and understanding when he met Chinmoy, and when it became clear that the guru was not the man he thought he was, the guitarist dropped the name Mahavishnu and became, once again, just John McLaughlin (which, clearly, was plenty good enough).

It's a lengthy read (the 480-page book is augmented by another couple of hundred pages of bonus material for the e-book version) but it's a captivating one, as Harper traces McLaughlin's roots, his move to London and, despite already being different to those around him—an extremely disciplined man already searching for answers to the greater questions of existence and spirituality while those around him fell prey to alcohol and drugs (not that McLaughlin didn't go through a period of experimentation with such things, but it was relatively brief)—how he quickly established a reputation in London as a guitarist's guitarist. Harper explores how McLaughlin struggled, both physically and mentally, to stay his course at a time when so many jazz musicians were exploring freer terrain, the guitarist already charting new territory that was largely antithetical to it and predicated more on compositional rigor and discipline.

The book is not a full-fledged biography; it ends with the dissolution of the third and drastically reduced Mahavishnu Orchestra with keyboardist Stu Goldberg, bassist Ralphe Armstrong and drummer Narada Michael Walden—also the time when McLaughlin's allegiance to Sri Chinmoy ended and he began to explore his already burgeoning interest in the music of India with Shakti, a group that was as groundbreaking and transcendent as Mahavishnu Orchestra but garnered less attention if for no other reason than, after what had come before, his record label had no idea what to do with this move towards all-acoustic music, played with master Indian musicians including tablaist Zakir Hussain and violinist Lakshminarayana Shankar.

For those looking for a full McLaughlin bio, they'll have to wait, as the definitive script has yet to be written, perhaps because—despite being in his early seventies, a life of discipline and attention to both mind and body leaving the guitarist in remarkable physical and mental condition as he continues to record and tour regularly with the 4th Dimension group he formed in 2007, heard most recently on the stellar live album The Boston Record (Abstract Logix, 2014), as well as occasional reunion dates with Shakti—the story is far from over.

But for those who want to understand the origins and confluence of a multiplicity of factors that led to McLaughlin's seemingly sudden emergence as one of the world's preeminent guitarists, how the Mahavishnu Orchestra literally changed music as we know it, and what it was like to be a part of the exciting London scene of the '60s—when musicians from many disciplines were interacting and engaging because, for many, there were no boundaries around genres, it was all music and virtually anything was possible—Bathed in Lightning: John McLaughlin, the 60s and the Emerald Beyond sheds a massive spotlight on parts of McLaughlin's life previously unexplored in any detail. More than any other book on McLaughlin to date, with Bathed in Lightning Harper paints a more complete picture of McLaughlin by focusing on his early years and how they led, inevitably, to who and what he is today.