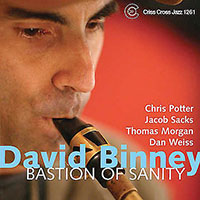 Kicking things off with Wayne Shorter's "Lester Left Town," Bastion of Sanity might seem a decidedly mainstream affair. And, with a cover of Duke Ellington's "Heaven" halfway through the 77-minute set, that intuition might be right. With his quartet of 20-somethings—pianist Jacob Sacks, bassist Thomas Morgan and drummer Dan Weiss, augmented for this recording by long-time collaborator Chris Potter on tenor saxophone—alto saxophonist David Binney has been concentrating on honing a looser, more freely improvised group sound at his weekly Tuesday night sessions at the 55 Bar in New York's Greenwich Village for over a year-and-a-half.

But while there is more than a passing nod to the traditional on Bastion of Sanity , the recording also fits comfortably within a growing body of work that includes '01's South and last year's Welcome to Life , two recordings that feature a more established roster, including Potter, guitarist Adam Rogers, drummer Brian Blade, bassist Scott Colley and keyboardists Uri Caine and Craig Taborn, alternatively. Binney's own compositions, which make up the balance of this new set, have always leaned towards complex form and irregular metres that, while providing space for soloing, focus more on improvisation within a predefined structure.

While idiosyncratic arrangements still abound on Bastion of Sanity , this is an altogether looser blowing affair, with Binney's young crew offering proof that there is an important new wave of young players emerging on the New York scene. "Try" may fit most closely with Binney's writing on Welcome to Life in its longer form and episodic nature. Still, Binney and Potter both get the opportunity for more expansive soloing. The more inward-looking "Plan," on the other hand, is a through-composed ballad that has its precedence in Wayne Shorter's "Nefertiti," with the horns repeating the theme while the rhythm section, in particular Weiss—who demonstrates his depth of versatility here, as he did on guitarist Rez Abassi's recent Snake Charmer —provides the improvisational impetus.

The title track, even with its elliptical theme stated in unison by Binney and Potter—a characteristic of much of Binney's writing—opens up even further. With the stronger emphasis on swing that is arguably the foundation of this set, differentiating it from his other recordings, Binney demonstrates a rich vocabulary, echoing the darker tone of early influences including Gary Bartz and Bennie Maupin. More audacious than usual during his solo, Binney is supported only by Morgan, who, at 22, is already a remarkably mature player—maintaining forward motion while, at the same time, being intuitively responsive—and Weiss, whose light cymbal work is redolent of DeJohnette's early ECM work. On "Gesturecalm" Sacks mirrors the progressive approach of Andrew Hill while remaining firmly planted in the mainstream.

Different than his other recordings, while at the same time completely in character, Bastion of Sanity finds Binney in a more open-ended context which he'll hopefully continue to explore alongside the more structured intricacies of his other work.