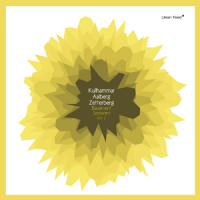 This is the second installment of the Swedish trio's manifold and largely, hard-hitting Basement Sessions motif for Clean Feed Records. And while the artists incorporate a high level of experimentation, they intertwine old school jazz values into the big picture via structured compositions and free-flight improvisations amid an aggregation of contrasting hues, capacious soundscapes and more. From a trio standpoint, the musicians bring quite a bit to the forefront. They expand, contract and generate some blazing, red-zone like turbulence with a few sizzling, free-bop style workouts

Reedman Jonas Kullhammar uses the Hungarian clarinet-like instrument taragato on the opening track, "Moksha." He projects an off-center soundstage with this single reed, woodwind instrument that has a plump and rather hollow resonance. But the artists shift the tide on a per-track basis. For instance on "Oort Cloud," Kullhammar, performing on tenor sax, glides atop a jazz-waltz pulse with reverberating and singing notes, rooted with a bluesy swagger, leading to the band's downpour of free form dialogues and accelerated by the rhythm section's mounting force-field. However, the diverse mix is chock full of unanticipated surprises such as "Elvin's Birthday Song," highlighted by Kullhammar's lighthearted and bouncy soprano sax phrasings, and steered by bassist Torbjörn Zetterberg who anchors the flow and pitch. Here, drummer Espen Aalberg expands the soundscape with sweeping fills and polyrhythmic beats.