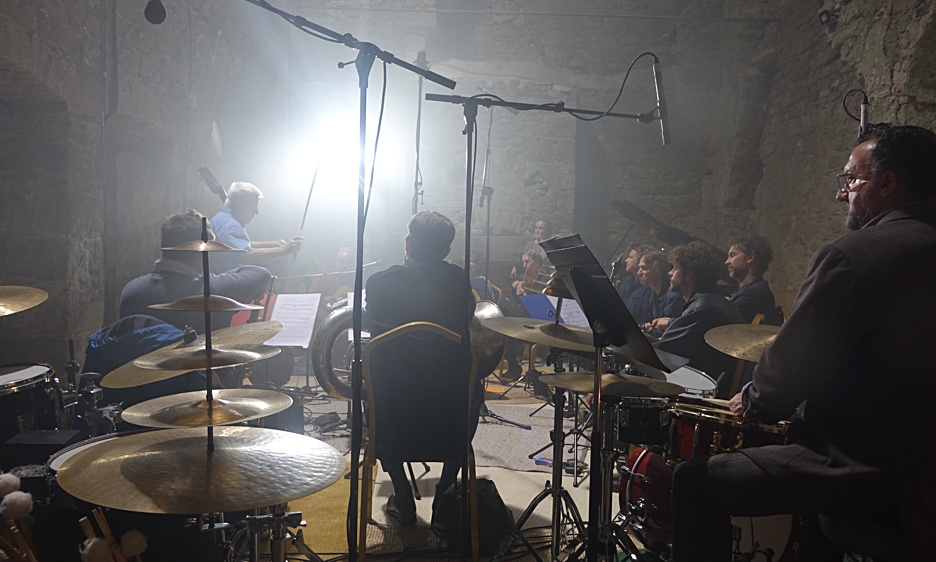 Have you ever wondered what goes into a performance? For some it might just be a quick run through of familiar standards, while for free improvisers any prep at all might be anathema. But for a large ensemble rehearsal is pretty much essential. Even more so when it comprises 14 musicians from nine countries who don't get together on a regular basis, as is the case with bassist Barry Guy's Blue Shroud Band.

In August Guy took advantage of a festival booking which fell through to rehearse the Band for two other upcoming festival appearances at the Frankfurt Alte Oper and the 2019 London Jazz Festival. While prestigious, such performances typically set aside only minimal rehearsal time and a soundcheck. While part of the group's DNA is it's gathering of accomplished sight readers who are conversant not only in jazz/improv, but also baroque music, there's still a need to refresh. Especially as the band last played its titular work, "The Blue Shroud," back in October 2017 in Essen, Germany. And in addition there was also new member, tubaist Marc Unternährer to absorb this time round.

But this was no ordinary practice. As well as running through the music, this was to be a key part of a film documenting "The Blue Shroud." The idea originated with Dublin-based filmmaker Jonathan Creasy, who also recommended using the historic Aghavannagh Barracks set high in the Wicklow Mountains of Ireland as the backdrop for the exercise. There was something poetic about making a documentary about a work dealing with the repercussions of war in a location so redolent of Irish history: a former military barracks built by the British to suppress the Irish rebels led by Michael Dwyer, a distant relative of the BSB's guitarist Ben Dwyer.

"The Blue Shroud" is deserving of such attention. The 70-minute plus work is one of the crowning achievements of the Englishman's career, uniting as it does the distinct strands of his work in Baroque classical, contemporary new music, jazz and free improvisation. It's a work founded on contrasts and juxtapositions, a bit like Guy's bass style writ large. He takes as his inspiration three interlinked themes, the Spanish Civil War atrocity at Guernica, Picasso's masterpiece of the same name, and the titular blue awning hung over a tapestry of that painting which was the backdrop when US Secretary of State Colin Powell presented the case for the invasion of Iraq at the UN Building in New York in 2003.

The concept sprang from discussions with Irish poet Kerry Hardie, whose words both provided a text and suggested possibilities for structure and diverse types of improvisation. To offset the resultant spiky improv and dense ensembles Guy co-opts some of the loveliest melodies ever written, creating settings for extracts from H.I.F. Biber's "Mystery Sonatas" and the "Agnus Dei" from J.S. Bach's "B minor Mass." In this circumstance, Guy uses these reimaginings to signify humanity's indomitable resilience in the face of suffering and ultimately hope.

For the rehearsal, the musicians were arranged in a semicircle in the tower of the Barracks with Guy the focal point. The combination of a fog machine and bright stage lights generated an extraordinary atmosphere in the room for the filming. Hardie came to the first session, and recited her poem to further reinforce the mood. Then Guy ran through the entire score bar by bar, working to achieve the desired impact. The repeated passes at the material allowed consideration of the complexity, detail and richness of voicings -"hear subtones from saxophones" -which might pass a listener by in the blur of the concert situation.

With similar attention to detail Guy instructed drummers Ramon Lopez and Lucas Niggli on what he was seeking from their rustling shell percussion: "I'd like it to be really kind of ominous." And it was, transmitting a hint of subdued threat, like an intruder crunching on the gravel outside your window. Guy's explanations brought various parts of the charts to ever more vivid life: "This is weird surreal theater. You've really changed personality here."

There was a palpable sense of camaraderie in the air. This was clearly more than a gig for all concerned. In another example of the democratic ethos Guy promoted, various members stepped in to cue particular sections, especially when Guy himself was busy playing. It was also manifest in how the musicians offered ideas as to how to make things work even better.

One of the highlights of the piece comes when the band breaks into a funky waltz powered by drummer Niggli's crisp articulations, which provides the context for Michael Niesemann's impassioned alto saxophone soaring through and above the surging orchestral vamp. As Niggli described it: "We stay super cool while he goes nuts." At this point, Lopez proposed adding a triplet motif on his hihat to emphasize the counter riffing of trumpeter Percy Pursglove, tubaist Unternährer and the strings during the jazzy swing. They tried it a couple of times, finding that it pleasingly increased the cohesion of the ensemble. Even here though there were modifications, with Guy suggesting a gentle crescendo so as to make the effect almost imperceptible at first. It really worked.

Another particularly memorable passage comes towards the end, when Lopez partakes in a dizzying hyperspeed series of duets with varying band members, punctuated by orchestral interjections. However the realization wasn't quite fulfilling Guy's objective. He explained that what he had in mind was an overall shape and flow for the whole sequence of duets, rather than the content of any given segment. He added wryly, that as an improviser himself he had been seduced into enjoying the interactions and letting them to go on for longer than necessary, thereby diluting the potency he was after. With this direction, they practiced the bursts of improv, making them ever faster and the orchestral interjections ever more punchier and closer together, ultimately delivering the menacing feel Guy intended.

Various subgroups from the BSB were filmed improvising in the gardens surrounding the Barracks. A saxophone quartet of Niesemann, Torben Snekkestad, Per Texas Johansson and Julius Gabriel, sounded exceptional, while out at the main gate, once the postal van had gone by, the duo of Guy and vocalist Savina Yannatou performed the haunting Corsican song, from Attikos (Maya Recordings, 2010). The final piece of the jigsaw will be to film the concert production in either Frankfurt or London.

On the afternoon of the second day, the band was finally ready to put everything together in a complete run through, the equivalent of a dress rehearsal. In its entirety the work dazzled as a 70-minute multifaceted journey through transcendent melodies, whipcrack orchestral interjections, intricate rhythmic figures, solo and small group outbursts, song and recitation. Noteworthy were a mercurial exchange between Agusti Fernandez' piano and Pursglove's trumpet, and the lyrical backdrops for Hardie's words created by Dwyer's Spanish guitar, Yannatou's angelic voice and the leader's bass.

The Biber and Bach, beautifully rendered by violinist Maya Homburger, violist Marja Gaynor among others, heightened the poignancy of both Yannatou's vocals and their musical settings. In contrast to all the abrupt cuts, seamless natural transitions meant that the baroque sat comfortably amid the modern. The timeless melodies served to convey the resilience of the human spirit as well as the promise of redemption. The end result was incredibly moving. Guy's triumph is that all those disparate elements coalesced into a singular experience. The full run through was lauded by the band as the best rendition so far and augurs well for future festival appearances.