By Marcia Hillman
April 8, 2010
Sign in to view read count 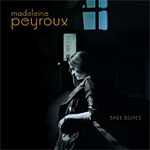 Bare Bones, is vocalist Madeleine Peyroux's third in the last four years and most personal, since she was involved in the writing of all 11 tracks and providing lyrics that are highly introspective. Peyroux also accompanies herself on acoustic guitar throughout. Her core band is Jim Beard (piano and Wurlitzer), Dean Parks (electric guitar), Larry Klein (bass) and drummer Vinnie Colaiuta, with additional instrumentalists on some of the tracks, including Larry Goldings (both Hammond and Estey organs), Carla Kihlstedt (violin) and vocal backing on one track ("You Can't Do Me") by Luciana Souza and Rebecca Pidgeon.

Peyroux works with several co-writers on Bare Bones: Julian Coryell, Walter Becker of Steely Dan fame, Joe Henry, David Batteau and CD producer Klein; she also wrote both words and music on "I Must Be Saved." The combination of talents leads to an extremely moody album. Emotionally, the lyric and musical messages run from the positive "Instead," sounding like a song that could have been done in the '20s (whose message is that of a 'half full glass' rather than a 'half empty glass'), to expressions of loss like "River Of Tears" and "Love and Treachery." The album seems autobiographical, as if Peyroux has stopped to take stock of where she is at this point in her life—and don't let the negative-sounding album title lead you astray (a line from the title track is "But in these Bare Bones / I guess there's something lovely after all"). There is a positive thrust to her lyrics that is a change from her previous offerings, which have mostly been of a melancholy nature. "I Must Be Saved," with lyrics like a laundry list, is the most indicative of where she is philosophically.

The music goes from folk (perhaps due to her acoustic guitar accompaniment) to country (the appearance of both violin and pedal steel guitar) but Peyroux manages to pull it all together. This is a storytelling album, a mission at which Peyroux excels. Whatever tale she is telling, she does it with the 'little girl' quality of her vocal, which lends itself most ably to the honest unfolding of the album's stories. An additional and helpful bonus is the insert containing all of the song lyrics. Each track on Bare Bones is a little gem and a listener is sure to find one or more that will resonate within them.

Instead; Bare Bones; Damn The Circumstances; River of Tears; You Can't Do Me; Love and Treachery; Our Lady of Pigalle; Homeless Happiness; To Love You All Over Again; I Must Be Saved; Somethin' Grand.