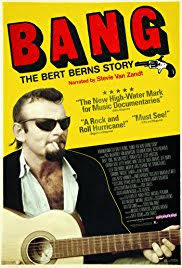 BANG! The Bert Berns Story compares favorably to The Terry Kath Experience (FilmRise, 2017), not just in the elevated quality of its conception and execution, but in its authorship by an offspring of the subject. Just as the Chicago guitarist's daughter, Michelle Sinclair, helmed the documentary she produced and directed in homage to her late father, this feature is the result of exhaustive research and collation by the late songwriter/producer's son Brett and the story it tells is as vivid a depiction of the music business as the pivotal, but unfortunately still somewhat unsung figure who toiled within it.

Eight years in the making with Bob Sarles, Emmy-nominated film and television editor, producer and director, such labors of love as BANG! aren't usually so objective. But the younger Berns' broadminded and thorough approach not only creates a propulsive main narrative, but also results in an hour of additional content on DVD, the products of which not only belie the cheesy graphic design of the cover art, but superficial preconceptions a viewer may bring to the subject of this film. In the end, The Bert Berns Story deserves to be regarded as a valuable historical document, worth preserving for posterity, precisely because the serious and empathetic approach of all those contributing to it lends prestige to an important figure in the contemporary music business of the Fifties and Sixties. As a result, the documentary should grow in importance over time.

There's a wondrous sense of discovery in the tone of voice (Little) Steven Van Zandt brings to his narration (written by journalist and author Joel Selvin) . It's as if if he's learning in the moment(s) he speaks of all the varying and sometimes conflicting facets of this man and his tales of creativity and in some cases, conniving with self-avowed avowed organized crime fixtures like Carmine "Wassel" DeNoia. The business operations involving such unsavory characters come to predominate the film's themes as the story of Bert Berns' success unfolds: his hit-making savvy grows so lucrative, he goes into business with the principals of Atlantic Records and founds his own label, Bang Records, an achievement rendered all the more remarkable because the man consciously avoided repeating himself in either the r&b or pop/rock idioms.

Accentuated by the sounds of an original score from keyboardist/composer Barry Goldberg (Bob Dylan, Michael Bloomfield), the pace of The Bert Berns Story, as written by Christina Keating, never moves so fast as during the account of the instantaneous success of the aforementioned enterprise established in conjunction with Jerry Wexler, Ahmet and Nesuhi Ertegun. And The Strangeloves' "I Want Candy," along with the McCoys' "Hang On Sloopy" (competition for which arises from another release of the tune, then mysteriously disappears) even prefaces Neil Diamond's emergence as a recording artist. In a foreshadowing of both personal and professional downturns, fallout from that discovery is a harbinger of the fracture in Berns' relationship with his long-time mentors and, not surprisingly, this point where commerce supersedes creativity, thus exacerbating Bert's life-long health problems.

The man's sudden death at the age of thirty-eight would seem to compel an inevitably abrupt end to Bang!. Yet it's a nominal shortfall on filmmaker Brett's part that he doesn't make more of the last hit on which his father collaborated, Erma Franklin's "Piece of My Heart:" particularly as the song co-written with Jerry Ragovoy becomes even more famous through the voice of Janis Joplin (whose recording with Big Band Brothers plays over the credits), Bert's offspring would've done well to link that sequence of events with the similar circumstances surrounding The Beatles' cover of "Twist and Shout." More such emphasis on this watershed event in Bert Berns' career would impart additional logic and continuity to this film and likely as not eradicate a sense of hurry all too palpable in the final interview segments, including those with Paul McCartney and Keith Richards.

The Beatle and the Rolling Stone are just the most high-profile personages that speak during the course of the film proper and the extra footage included as a bonus on this DVD is quite unlike such features. Usually comprised of little more than after-thoughts, the extra content here begs to be seen and heard, in part because the film itself tells such an engrossing story, but in more practical terms, because it is wholly different footage than appears in the formal ninety-plus minutes. Famed producer (of artists as diverse as Roland Kirk and Roberta Flack) Joel Dorn a/k/a "The Masked Announcer," offers an erudite declaration of the importance of Bert Berns' efforts that might well have been the literal last words in BANG!.

Ultra-cognizant of history as he is, Sir Paul also makes an earnest and convincing case for acknowledgment of Bert Berns' place in contemporary music history, while the Mick Jagger's songwriting partner speaks in absolutely awed tones about such compositions as "Cry To Me" (covered by his band in its early days). Yet other conversations, with soul icon Solomon Burke, songwriter Jeff Barry and even the reclusive Van Morrison, also help deepen the insight into Bert Berns' life, work and legacy; it's no small revelation the Belfast Cowboy speaks so understandingly of his relationship with the songwriter and producer, given the rancor that developed between them in the aftermath of their shared successes, on the solo front with "Brown Eyed Girl," subsequent to breakthrough collaborations, including "Here Comes the Night" and "Baby Please Don't Go," with the Irishman's band Them,

In fact, BANG!: The Bert Berns Story makes an irrefutable case that the honor bestowed on the father of this filmmaker by his 2016 induction into the Rock and Roll Hall of Fame (ironically with the Ahmet Ertegun Award for Special Achievement), is of somewhat lesser import than numerous other significant occurrences in his life, like the one involving that Isley Brothers' song recorded by the Fab Four: the co-author eventually bettered the initial studio work on that number formulated by none other than Phil Spector, the creator of the 'Wall of Sound' production style.