By Troy Collins
September 24, 2006
Sign in to view read count 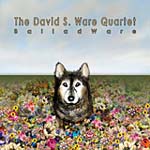 After a 1999 European tour, the members of the David S. Ware quartet set out to capture their tumultuous live energy in the studio. Post-tour exhaustion derailed their attempts to record a high-energy performance, so they agreed upon a ballad session instead. As a result, BalladWare is the most nuanced and restrained performance by this quartet ever caught on tape.

Tenor saxophonist David S. Ware is joined by his usual quartet members, pianist Matthew Shipp, bassist William Parker and drummer Guillermo E. Brown, on a set of delicate yet impassioned ballads. They have recorded versions of all of these tunes separately in the past, but these new interpretations are markedly different than the originals.

Ware eschews his usual cathartic release, instead opting for a more measured approach. Shipp is ingenious in his accompaniment and solos, the reserved setting provides increased focus on his subtle harmonic talents. Brown is a rich colorist, interlocking seamlessly with Parker's nuanced support on these rubato forms. Due to the conversational nature of the session, ample space is made available for unaccompanied solos, duets and passages bearing minimal accompaniment.

Although nuance and subtlety might seem at odds with a group renowned for calamitous exuberance, the musicians adapt remarkably well to the restricted energy level. "Yesterdays" is taken at a languorous pace, while "Dao" moves along at a brisk but gentle clip, with Shipp's piano given to tender, abstruse lyricism. On such recognizable fare as "Tenderly," the real creative potential of the group comes to the fore. With irreverent deconstruction, the quartet reduces the piece down to a simple phrase, reconfigured, re-contextualized and re-imagined as an epic mantra.

The quartet circumnavigates the eye of the storm for a lesson in the benefits of restraint. While a cut like "Godspelized" verges on erupting into the sort of maelstrom they could easily summon, they step back, keeping the structure of the tune intact, merely burnishing the edges, rather than immolating the entire song.

Not just an exercise in restraint, BalladWare is a melancholy investigation of roads rarely traveled, and quite rich in simmering detail.